It's the Vietnam War, Filipino style! 1986's The Devastator (aka The Destroyers) stars Rick Hill (Deathstalker), Katt Shea (Barbarian Queen), and was directed by one of the all-time masters of Filipino-sploitation, Cirio H. Santiago! What's more, it's produced by Roger Corman and is considered an entry in the "Pre-Nuke Collection." The war is over and a Vietnam vet visits the town of his former commanding officer only to discover that there's a land war being fought over the control of marijuana fields and the town is being strangled by an army of drug thugs. What's a guy to do? Reassemble the old team and take the war to the bad guys! Shot in both California and the Philippines, this movie seems to be chasing the success of both First Blood and Rambo: First Blood Part II with some Chuck Norris action thrown in as it mounts up a huge body count while also showing the bonds of brotherhood between our soldiers. This one feels like a pulp novel come to life and it's everything the trailer promises. It's on Blu-ray from Code Red. Stay tuned for coverage of this film in the next Review-Palooza! 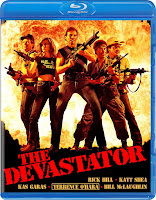