Gunsmoke: The Complete Series Headed to DVD - What This Means for Physical Media 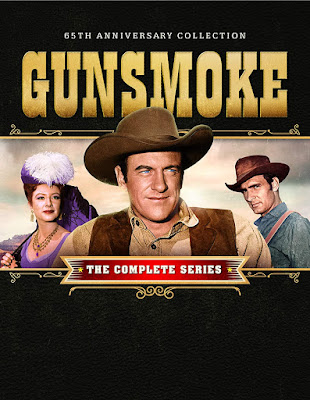 This is a big one, folks, and it holds a lot of meaning for those of us who buy, watch, and collect the movies and TV shows we love on DVD and Blu-ray.

In all honesty, I never thought I would see the day when the longest-running TV western of all time (20 seasons, from 1955 until 1975) was not only completed on DVD, but was given a lavish, deluxe package. 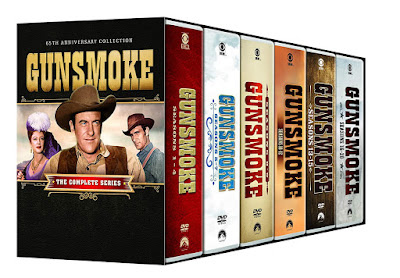 For those who might not have been following the saga of Gunsmoke on home media, the series first saw a DVD release way back in January of 2006 when Paramount put out two 50th Anniversary box sets, each serving as "best of" compilations chronicling a ten-year chunk of the show. This was certainly to test the waters and see how well the show could sell on DVD, which was in its heyday.

Season One of Gunsmoke finally came a year-and-a-half later in 2007, with every subsequent season being split into two halves and released months apart. Fans of the show could hope, at best, to add one complete season of the show to their collection each year. Sometimes there were 10 months between releases. After Season 12 Part 2 was released to DVD, it took nearly two years before Season 13 Part 1 was released.

The tricky part about releasing shows like Gunsmoke to DVD is that the law of diminishing returns is in full effect. And it's not just DVD sales. Any comic shop will tell you that number ones sell like gangbusters, but number 5? Not so much. Number 17? Forget about it. The enthusiasm and blue sky opportunity that accompanies a debut quickly falls off, as do sales figures. So the undertaking of a 20 year show (not counting reunion movies) on DVD is huge, and many fans wondered if this law of diminished returns and shrinking sales profits for Paramount would result in the show never being completed on DVD.

That's what makes this "Complete Series" package such a huge deal. This is the culmination of 14 years of baby steps, of half-season releases, of fan support, of wonder and worry that the show would be abandoned on the format.

But here it is! 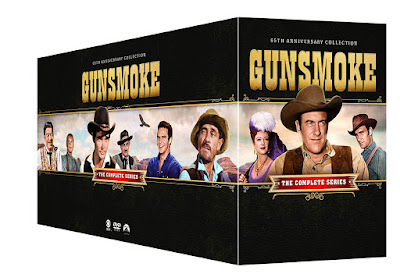 For all those who say "physical media is dead," for all the worry that the market has shrunk to the point where it will no longer sustain wide releases on the mainstream market, Gunsmoke says "not so fast, partner."

It's not just the completion of the show on DVD that fills me with such hope and joy. It's the sheer SIZE of the thing in the first place, accompanied by a retail price that may seem high at first, but that seems shockingly-low when one realizes what is included.

Gunsmoke: The Complete Series arrives on DVD in a whopping 143 disc collection. This must be a new record for the largest single DVD box set in existence. The show ran for 635 episodes totaling a combined length of over 440 hours. The retail price for the set is $338.98, but many online retailers, including Amazon, have already dropped their price down to around $210. That's a couple of hundred bucks for 440 hours of television, not including special features. A dollar and forty-seven cents per DVD. 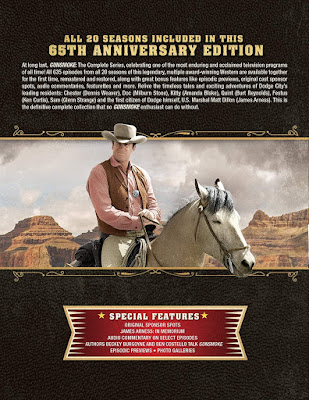 This is beyond good news. It's a shot in the arm for everyone that's worried about the future longevity of home media in an ever-increasing streaming world. Paramount has done the unthinkable, and we better believe that other studios will be watching to see how this package sells. Whether or not you are a fan of Gunsmoke, we should all be pulling for this release to be a success. If interested and able, please support Paramount's efforts instead of waiting for some drastic price drop or for a Blu-ray announcement, which is doubtful to come, given the expense of such an undertaking and yes, the diminishing returns. This set exists because of 14 years of hard work. Had Gunsmoke arrived on DVD much later than 2006, would the possibility of such a box set exist today?

I just had to share this news. I'm filled with hope, joy, and excitement for the continued viability of the movies and TV shows that we love on a format that we can own and watch forever on our own terms. If Gunsmoke is possible...ANYTHING is possible.