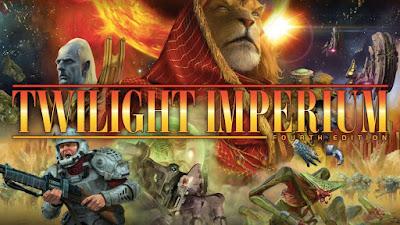 I have been a gamer for most of my life. I have played everything from video games, card games, role-playing games, miniature based games, to board games of every stripe. I dearly love the interaction of both competitive and cooperative games. I think having a variety of games in one’s life makes for a much better social experience. I realize that most of us game online because it is so much easier. However, if you happen to be one of the lucky individuals that have an in-person gaming group, I would love to introduce you to one of my all-time favorite games. Twilight Imperium, by Fantasy Flight Games, is a game that encompasses just about everything any good gamer could want. It has a great sci-fi setting. It has a very deep game that includes politics, intrigue, and very cool fights. It has a set of races that I simply adore.  Frankly, I wish there were movies or novels that could go with this game. I would absolutely buy them. 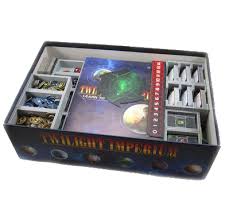 Twilight Imperium is a space game that pits many factions against one another. The play experience is so vast and deep that the development of technology, politics, espionage, votes, and the individual arms races of various factions are incorporated into the game.  The universe is well fleshed out and is immense in scope. Alliances are formed and broken. Betrayals occur. In the end, there can be only one dominate race. In short, this game has everything a fan of space opera or hard science fiction could love. It is stunning and immersive to play. It is easy to tell from the way the game was developed that it was a labor of love by people who truly understand science fiction conventions and tropes. Twilight Imperium is the complete package. 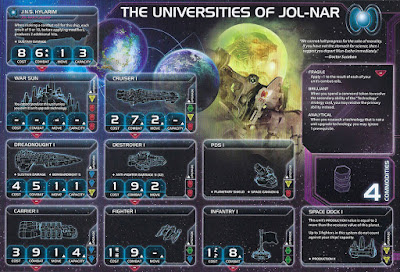 The game has been through various incarnations and is currently in the 4th edition. I have played it since the beginning and have enjoyed seeing it develop over time. The greatest addition to the game has been the miniatures that are now included.  These can be painted or simply left as they are. Some individuals have even taken the game beyond the supplied materials. Special tables have been built by creative gamers just for this amazing game. Some people even custom-build their own planets to use on the game board. All of this just adds to the hobby that surrounds this property. There is a fierce love for Twilight Imperium that has almost reached “cult” status over the years. 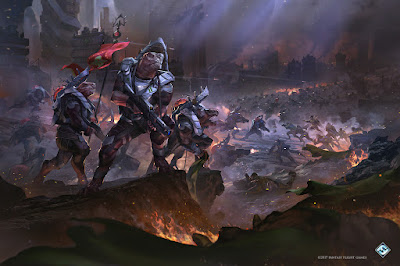 The replay value of Twilight Imperium is virtually unending. The board is made of many tiles that are randomized and placed by players. These tiles may have planets or other features on them. As a result, no game is ever the same.  I addition to this there are currently 17 possible factions that can be played. It is important to note that this is including all supplements from the current and past editions. The game is as big as you want it to be. No supplements past the main box set are needed to play, but I honestly do not know anyone that plays this game that does not want all the supplements. The various factions all have special abilities.  Each group is so different, yet balanced, that it is a challenge to learn how to play each faction. In my gaming group, we tended to play the same factions all the time. It is honestly very similar to the devotion one finds in sports. In my group, each of us knew who would be playing what faction every time the game was played. Everyone in my group knew that I would be helming the Universities of Jol-Nar 100% of the time. 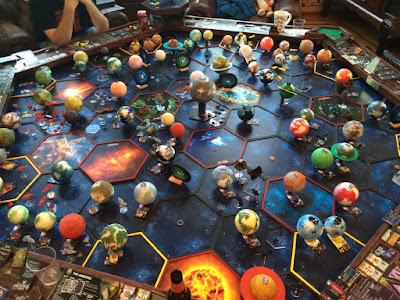 This is what makes the game so personal and so much fun. There are ample opportunities to even insert a bit of role-playing into a game session. Each race is carefully crafted to reflect certain traits and abilities. Some are war-like and some are technology-driven. In the case of my beloved Jol-Nar, they are weak but technologically driven. They are the intellects of the galaxy and choose to fight with their intelligence instead of their brute force. Their play-style is more reserved until they have the capacity to wipe everyone out. They depend upon the development of extremely powerful technology to make up for their lack of combat prowess. They manipulate and they delay. Subterfuge and deception are the norm.   The special ability they have to adapt to and learn any technology from other factions is terrifying to an opponent. Having one’s own technology used against them is terrible for other factions and using such technology is delightful for the Jol-Nar player.  I also love the way they look. 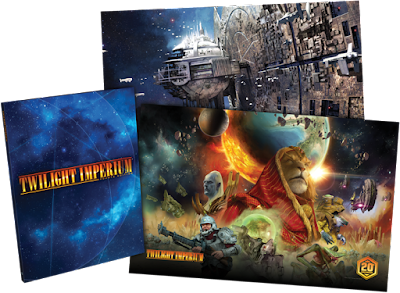 This game should be played with friends and with those who have a great sense of sportsmanship. The best part of this game is that even if you lose, you will still have fun. The game is for 3-6 players, but it has been my experience that the closer to six you have the better and bigger the game seems to feel. It can also take a long time to play.  Sessions can last between 4-8 hours.  Twilight Imperium is not for the intellectually faint of heart. The complexity is a very real challenge, and the learning curve can be high and often brutal.  It is important to note that later editions have tried to simplify certain aspects of the game. However, it still remains very complex.  If you can manage to get a group of friends that enjoy this type of game, there is nothing like it in the universe. It becomes part of you and your gaming culture. I have long moved away from my big gaming group. We are all older and have families of our own now. Our lives are busy, but within all of our hearts, there is still the desire to helm our favored faction and light up the galaxy with the burning fires of our enemies’ destruction. 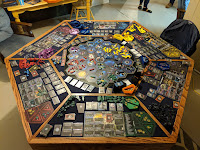 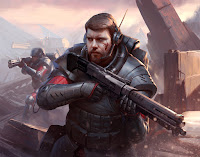 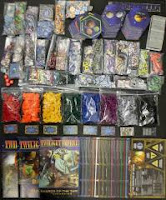