The Creature Columns: The Reapers are the Angels Book Review by Tom "Creature" Jeffers 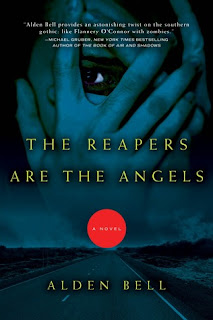 Southern Gothic literature has been a pleasure of mine for many a year now. The way the words roll off the page and into the heart and soul of a man is a beautiful thing to experience. In many of my graduate studies, I was confronted by such prose regularly. The likes of Flannery O’Connor, William Faulkner, Harper Lee, and Cormac McCarthy come to mind. To this list of masters I would add one name: Alden Bell. The name even seems to fit the description. Bell is the author of The Reapers are the Angels. This novel is southern Gothic through and through. It also happens to be about zombies and the apocalyptic world that such things bring about. This is a beautiful work that deserves the highest praise possible. Even though I enjoy all forms of literature, the zombie novel is generally delegated to the bottom of the pile when considering serious prose. They are generally formulaic and redundant. Such stories can only take a reader so far. However, The Reapers are the Angels manages to transcend such a label and become so much more.

The novel opens in medias res as Temple, a 15 year old girl, is living in a lighthouse alone. She does not mind the solitude. All she has ever known is a world that is devastated by the zombie outbreak. She has not succumbed to despair because it is her world. She sees the beauty in everything. It is as if the zombies, which she refers to as “meatskins” or “slugs,” have always been and are just another part of the fauna. That is the strength of this novel. The zombies are present, but they are just background noise to a larger world filled with far more evil and dangers than the threat they cause. Temple finds one wandering on the shore of her lighthouse beach and has to deal with it. She realizes that she will need to move on because the appearance of the “slugs” will continue. She remembers her brother as a young boy that she tried to protect. She has a sense of guilt about his death that seems to have hardened her soul a bit. As she begins her journey she encounters all sorts of individuals that cause her trouble and fill her life with danger.

There are some fantastic elements to this story, but they come off as horrifically believable. One of the best encounters happens early on when Temple encounters a man with a dead woman in his arms. The man is mentally challenged and Temple refers to him as “Dummy.” He does not speak but follows her obediently. The irony here is that while the name “Dummy” would be considered abusive by many, Temple cares deeply for this man and vows to protect him until she can find a safe place to deposit him. Here is where I must stop with any plot revelations, because this book is better experienced that spoiled. However, I want to share some of the prose to encourage those who care. This novel has some of the most unique prose ever written in a zombie novel. It is simply beautiful.

“God is a slick god. Temple Knows. She knows because of all the crackerjack miracles still
to be seen on this ruined globe.”

This line just about encompasses the entire work. I can almost hear her voice with the southern drawl in it and she describes how the maker of all things is a crafty individual because he has hidden tiny miracles on an earth that has been devastated. This is her attitude about everything as she makes her way through her journey. She sees the good when no one else does.

“Beyond the pursuit of meaning and beyond good and evil too, she says. See, it’s a daily chore tryin' to do the right thing. Not because the right thing is hard to do—it ain’t. It’s just cause the right thing—well, the right thing’s got a way of eluding you. You give me a compass that tells good from bad, and boy I’ll be a soldier of the righteous truth. But them two things are a slippery business, and tellin' them apart might as well be a blind man’s guess.”

This quote is just dripping with style and it is easy to see why this novel was nominated for a Philip K. Dick award. Seeking meaning seems to be a theme of the book and the purpose of life in difficult times is the noblest pursuit. The ambiguity of morality in such a fallen mess of a world would lead to some serious soul searching. The novel makes this a potent theme and the desire to find what is good and what is bad is one of Temple’s biggest struggles.

“Truth be told, the inward gaze is something she’s not too fond of. But there are secrets that lurk in the mind, and she doesn’t want any of them sneaking up on her. Sometimes it pays to take a deep look inside even if you get queasy gazing into those dark corners.”

The thinking here mostly relates to introspection. This novel is filled with it and it becomes a tremendous theme throughout the book. The decisions one has to make in the face of impossible circumstances show just what kind of person an individual is. There is a sense of looking inside to gaze at oneself in order to keep control on the inner darkness that manifests itself in all of us.

As a reader, I appreciate you indulging me with these few quotes. The fact of the matter is this. The Reapers are the Angels is a masterpiece that is not likely to be duplicated by many. The apotheosis of Temple’s character arc is a thing to behold and the way the story moves will make a discerning reader think about it for months. This is a novel that touches on every facet that makes something good literature. Somehow in the zombie saturated popular culture we have seen in recent years this novel emerges at the head of them all. It is as powerful as any classic and deals with the themes of the human condition better than most lauded works of fiction. A hundred years from now I hope people are still reading it and reflecting on the wisdom inside its pages. This novel belongs to what lies ahead. Those of us in the present are privileged to have such a story to experience, because this novel belongs to the future and the generations to come. I have little doubt it will become one of the classics of tomorrow.