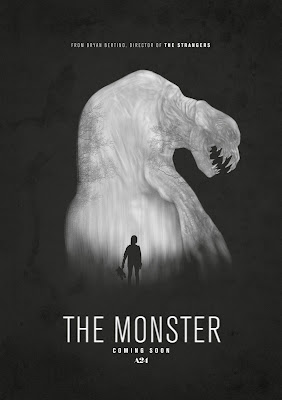 Bryan Bertino’s The Monster is a fantastically-fun monster movie in a genre that is filled to the brim with questionable offerings. Bertino has a command of his writing and director skills like few in the industry manage. He is the total package when it comes to what he seeks to do. Many will remember his incredibly effective and terrifyingly-chilling movie The Strangers from 2008. The Monster is no less spectacular and tension-filled. This is a little movie that hits every bullseye it aims at. The film is a study in tension and the unknown. It is fantastically acted with brilliant practical effects. This is a film that feels more like a late 70’s or 80’s movie that deals with contemporary issues. The film is gorgeous and makes use of powerful storytelling. This is more than a terror-driven story. It is a story of the inner workings of the human heart. I love it when a horror movie transcends the genre into something more than just a gore spattered thrill ride. 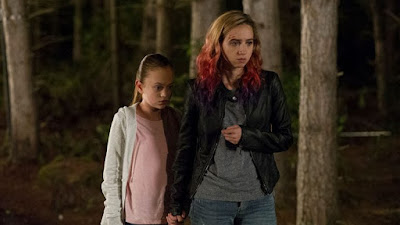 The Monster might have been called The Metaphor by a snarky critic. That assessment would honestly fit well. The creature in the film is indeed a symbol of the underlying issues of the main characters. It seems to represent different things at different moments of the movie. The mother, Kathy, played by Zoe Kazan, is trapped in a world of addiction that has lead to a terrible relationship with her daughter, Lizzy, played by Ella Ballentine. Lizzy has almost become the parent and the responsible person in the relationship because her mother is incapable of being what she should be. Throughout the movie, we are treated to horrific flashbacks of the mother and daughter’s completely dysfunctional relationship. All of this has caused the two to travel a dark road on a stormy night toward Lizzy’s dad. Yes, it is a literal dark and stormy night. Her dad will be taking custody of her. Lizzy seems to be at the age where young people can decide which parent to live with. She has  elected to move to her dad’s because she simply can’t take her mother’s bad behavior anymore.

The volatile relationship between mother and daughter is the real monster of the movie. The mother is also a monster because she is so lost in her addictions. The actual monster of the movie stands as a metaphor for all the damage and trauma of this relationship. Movies like this make my literature teacher brain tingle with delight. The monster is an interesting creature to think about. It parallels the dysfunctional relationship of the mother and daughter while at the same time serves as the catalyst to bring them together and motivate the mother to finally do what she needs to do for her child. It is also interesting to note that the monster has ample opportunity to attack the daughter early on in the film but does not do it. To me, this speaks about how human beings often live in monstrous relationships under constant threat. Even though this dysfunctional mother behaves horribly, she still has some restraint when it comes to her daughter. The wild part of her is violent and uncontrolled while the maternal part of her will only allow her to go so far. Couple this with the onset of rain and darkness and the eventual coming of the light and calm weather at the end, and you have a classic look at how setting and action can work in tandem to create powerful parallels. In the case of The Monster, this is done to brilliant effect. 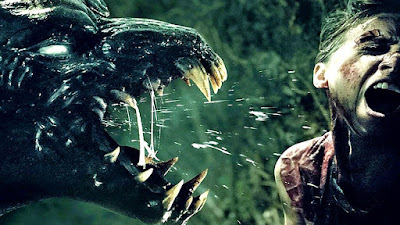 The practical effects of the film are excellent and bring to mind the monsters of past fame. The monster looks good but is mostly kept off-screen and in darkness for much of the film. This is effective as a tension and dread building device. The creature and the circumstances of the film come off as a marriage between the Xenomorph from Alien and the plot of Cujo. The overall result of this combination makes for one of my favorite monster movies in a long time. I love the aspects of the movie that pull from the creature features of yesteryear. The Monster may be a bit heavy-handed in its presentation, but it is a film that I thoroughly enjoyed. If you are looking for a great creature movie, I can highly recommend it. I am glad to see this type of film that takes the tropes of the monster genre and tries to give it some heart and soul. Monster movies are far too often afflicted by cheesy scripts and ineffective CGI. However, The Monster is handled fantastically in every regard. Once again, this is a film that needs far more mainstream attention than it is getting. We can only hope that director/writer Bryan Bertino continues to grow as an artist. He has given us a fantastic movie that I was happy to spend time with. 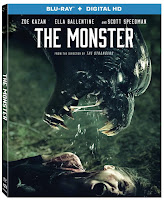 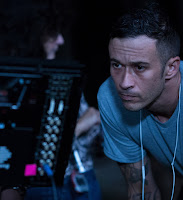