The Creature Columns: "AM1200: An Obscure Masterpiece" by Tom "Creature" Jeffers 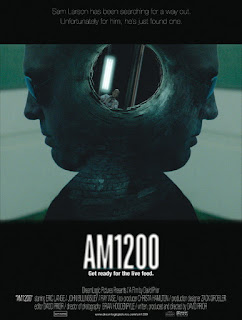 The loneliness of a dark highway can be a daunting monster for anyone who has ever traveled alone at night. There is just something about the isolation and the field of view that only headlights provide. It feels like one might slip out of the universe by simply leaving the road. This is the world that writer/filmmaker David Prior places his audience in. The film is only a short 39 minutes from start to finish, but the sense of dread that the movie creates is right out of the pages of Lovecraft. That is what first drew me to this film a few years back. It has the feeling of creeping dread that I crave in cinema. I discovered it purely by accident and was immediately attracted to it. AM1200 (2008) is a film few people have seen, and that is a tragedy. This movie is tension-inducing nightmare fuel. Prior should have been immediately tapped to adapt the ever-elusive and almost “unfilmable” works of Lovecraft. This movie is dread-inducing perfection, and I love every terrifying second of it.

The film opens as our main character, Sam Larson, played by Eric Lange finds out that some corporate corruption that he has been involved with has gone completely wrong. His co-conspirator ends up committing suicide over the incident, and Larson makes the hasty decision to run for it before law enforcement officials come for him. This is where the story departs from reality and enters into something far darker. As Larson drives on the lonely highway, he turns on his radio to try and stay awake. He hears a broadcast from AM 1200, call letters KBAL. The station seems to be calling for help. Larson has no intention of listening to the plea but ends up breaking down right in front of the radio station. What ensues inside the dark building is a trip towards slow madness. There might be people in the woods around the station, but we do not know for sure. There are signs of violence in the station but no dead bodies. There is what appears to be an insane, lone disc jockey handcuffed to a pole. It is into this world that Larson is plunged and the audience comes along with him. The tension in this film is something else and does not rely on jump scares to deliver any sort of relief. In fact, there is no relief; there is only madness.

To avoid spoiling this film, I am sparing many details of just exactly what is going on in the plot.
My main interest is to focus on the incredible mood and the way the film progresses. I keep using the word dread for a reason. As Larson goes on the run we feel the dread of prison chasing him. The radio broadcast causes a shift to another type of dread. We dread what might be going on at the station. Once Larson breaks down in front of the station, we feel the dread of an inescapable fate. Through all of it we get a sense that we are trying to understand that which is not understandable. This is what cosmic horror does. It is also why I generally find it to be my absolute favorite category of the horror genre. It is such a hard thing to achieve, but David Prior’s tight writing and absolutely bullseye pacing manages to create something incredibly special. Even the tiniest details are used to create a smart, terror-inducing, dread-filled experience. The very letters of the station KBAL bring to mind the word “Cabal,” This layers the film in a richness that is seldom seen. Somehow the 39 minutes of story we are treated to seem like hours. It almost made me feel like I was holding my breath the entire time. Once the film gets going, the audience cannot help but watch in grudging horror until the climax. And what a climax…..shudder.

David Prior deserves a tremendous amount of credit that he is simply not getting for this short movie. It is rendered with a terrifying love of the material, and the end result is one of the best modern Lovecraftian stories ever brought to film. This is yet another relatively unknown gem that is worth running down. It is not available for rent. You cannot stream it. It has not always been available for purchase. Thankfully, I managed to get it early on. I have heard it was limited to 1000 copies. There may be a few left on www.am1200.com. It is one of the most prized DVDs in my collection. I just hope that one day, AM1200 gets picked up by a boutique label and is given the treatment it most assuredly deserves. This is one for the ages.