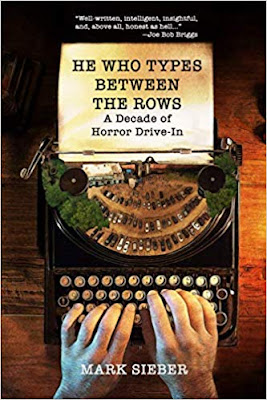 Mark Sieber is one of us.

Sieber is a fan, a genre enthusiast, a defender of physical media, a collector, a critic, and a writer.

I list critic and writer separately, because Sieber wears many hats, and in his case, he’s earned the distinction of being a critic and a writer. It’s never been more evident than with the collection of writings in his book published this year by the venerable Cemetery Dance Publications, He Who Types Between the Rows: A Decade of Horror Drive-In.

Yes, there’s that old adage that everyone is a critic, and with the advent of social media, it sure feels like everyone has an opinion and is quick to the draw to fire off a few rounds. Not all of those opinions are informed, and few fall into the same league as Sieber, who has been in the trenches and witnessed firsthand the drive-ins, the multiplexes, the horror paperback boom of the 80s, the rise of the small press and boutique labels in the 90s, the evolution of home video from VHS to DVD to Blu-ray, along with the ascent of writers like Joe R. Lansdale, David J. Schow, Joe Hill, Brian Keene, and Robert McCammon, to name a few.

Name a writer and Sieber is most likely not only familiar with their work, but well-versed in it, as well. Name a character actor, a scream queen, or a straight-to-video auteur, and Sieber has been there, bought the ticket, and watched all the special features on the DVD release.

In other words, Mark Sieber knows his stuff.

He’s not some Johnny-come-lately who takes filtered photos of stacks of newly released books and hashtags them, hoping to get some shallow “shares” or to trade Twitter exchanges with some trendy author. Sieber isn’t about chasing trends, because he has too much respect for the creators of our beloved pop culture—the myth-makers of our lifetime—whether they’re Richard Matheson or Harlan Ellison or Christopher Lee or Ruggero Deodato or John Carpenter or Jonathan Janz. If you’re familiar with any of those names, and I suspect you wouldn’t be reading this if you weren’t, then I recommend you become familiar with Mark Sieber and his work.

So who exactly is Mark Sieber and why should you care about his opinion? Sieber started a website (www.horrordrive-in.com) back in 2006, which in some ways, I suspect, served as both a personal scrapbook slash journal and a creative outlet for the man. It became something much bigger as quite a few of horror’s luminaries frequented the site to see what Sieber had to say on any given day. Those in the know, knew Sieber’s opinion and views carried weight and value.

Sieber earned the trust and respect of the horror community, especially the writers out there. Again, Sieber isn’t about chasing trends or trying to win a popularity contest. He’s been around too long to get caught up in that B.S., and the man has too much integrity. You may not agree with all of his reviews, but you’ll never question his honesty and his intentions.

Mark Sieber is a champion of genre work. If you’ve ever read a copy of Fangoria, pined for the days of a horror paperback section at some mall bookstore, chatted it up with the owner of a Mom and Pop video store, or spent too much of your paycheck back in the day at Best Buy, then you and Sieber (and me) probably share a lot in common. Cemetery Dance has collected Sieber’s essays about many of these aforementioned topics in He Who Types Between the Rows.

Having read Sieber’s He Who Types Between the Rows, I have to admit I wasn’t quite prepared for the emotional impact his book had on me. Yes, it hit me in the feels, as the kids say these days, and it’ll make you feel nostalgic for all things analog, too.

He Who Types Between the Rows is about more than collecting DVDs or having a good time watching a grindhouse movie or hunting down some hard-to-find novel: it’s about the journey—protecting the fragile clamshell cases of the faded out memories we hold so dear, and forging ahead into uncharted territory, finding fleeting moments of joy and escapism in between the graveyard shifts or the stop-and-start bumper to bumper tango of rush hour traffic. You may be going through a rough patch in your personal life right now, but someday you’ll look back and say, “I sure miss the good old days.” Don’t take it for granted, this experience. Life isn’t necessarily about whether you prefer to listen to your music on vinyl or CD, it’s about actually being present and hearing the music, regardless of the delivery mechanism…and then playing it for your friends. Maybe you’ll turn them onto something they’ve never heard of, and the word will spread.

And Sieber is one of those who preach the Good Word. He wants you to be hip to writers who may not have broken through to the mainstream yet, such as Rio Youers, but who deserve the commercial acclaim (to go along with the critical praise). Sieber wants visionary writers like Charles Beaumont, taken far too soon, to be more than a footnote or a piece of Twilight Zone trivia, so he shines a light on them. It’s commendable, yes, but Sieber has been doing this for years. The horror genre, in particular, is a better place because of his work. (The book contains essays about Vice Squad, Dario Argento, The Cramps, and “Winnie the Pooh and the Agony of Growing Up,” among other topics.)

In the book’s dedication, Sieber writes: “To the writers. The good, the bad, and all the ones in between. Thanks for chasing your dreams and sharing your nightmares with us.” Yes, first and foremost, Sieber is a fan, but this book deserves to be on your shelf next to Michael Weldon’s The Psychotronic Video Guide to Film, Stephen Thrower’s Nightmare USA, and Grady Hendrix’s Paperbacks From Hell, because He Who Types Between Rows will take you on a journey that will remind you why you’re a fan, too.

And for that, I say, thank you, Mark Sieber.

In addition to his contributions to Cereal At Midnight, Joshua Jabcuga adapted Joe R. Lansdale's novel Bubba Ho-Tep and the Cosmic Blood-Suckers for IDW Comics. He is also a journalist for All Elite Wrestling. Follow him on Instagram and Twitter @Jabcuga.