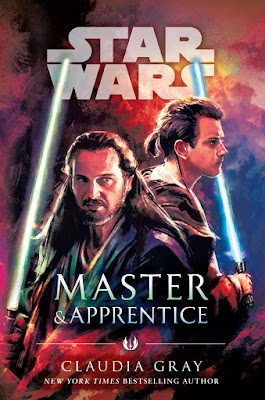 *This review is mostly spoiler free.  Mild spoilers will be announced.

Claudia Gray has done something remarkable with this novel in the fact that she has managed to capture the ever-elusive spirit of Star Wars. Most readers must acknowledge that Star Wars novels rarely hit the marks that serious literature attains. They are not meant to. These works are meant to embody a spirit of adventure and pull us into a place of nostalgia that makes us warm and happy. While not all offerings in the Star Wars genre manage to tap into these feelings, Master and Apprentice does so in such a special way that it transcends Star Wars and becomes something even larger. This novel has the goods.


Set years before the events of Episode 1, we are treated to an inside view of young Obi-Wan Kenobi and his master Qui-Gon Jinn’s relationship. All is not well as the two have come to an understanding that they simply are not connecting to each other in the way a Padawan and his master should. Obi-Wan misreads Qui-Gon at many turns and the strife and self-deprecating that ensues shows us the inner struggle of both characters. We are privy to their inner workings, and we see that Jedi are just like other people when it comes to forming relationships. Gray’s command of character development is staggering. She truly gets these characters and everything that makes Star Wars so special. The reader gets to see these internal struggles and is given knowledge about both characters that remain hidden to them. I found myself many times just wanting them to be honest with each other. Gray has placed the reader into a position that we can see what needs to happen when the characters do not. I loved this glimpse into the minds of these two men. It made them feel more real to me than ever before.

When Qui-Gon Jinn is offered an unexpected seat on the Jedi council and fails to inform Obi-Wan of the council’s offer, we see a distraught Obi-Wan try to cope with what he perceives as his failure as a Padawan. He blames himself for not being worthy of his master’s trust. Gray shines here with her depiction. Obi-Wan might be a Jedi, but he is also a teenage boy. He feels the crush of disappointment in a real way and responds to Qui-Gon just as a real person might. He is filled with disappointment, a sense of grudging respect, and even resentful anger at not being told. He misinterprets his master’s lack of forthrightness just as a real teenager might. From Qui-Gon’s perspective, his Padwan is justified in his feelings. He sees this as his failure as a master. He knows he should have told him, but circumstances occurred to where this wasn’t possible. Just like many real adults forget to tell children the things they should, he waits until someone else inadvertently does it for him. He wasn’t ready to do it; he was waiting for the right moment. By accepting the position on the council, Qui-Gon knows that he would need to have Obi-Wan reassigned to a new master. He feels that he is failing his apprentice because they have not developed the connections that should exist between master and apprentice. Both men deal with this internally instead of with each other. 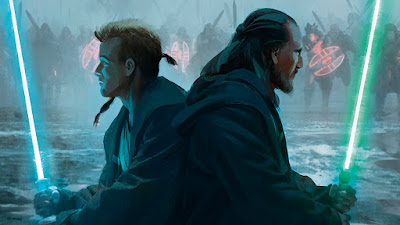 Therein lies the reason for this incredible novel and the ironic beauty of the title of the book. Qui-Gon postpones his decision to join the council to go on one last mission with Obi-Wan. He is uniquely suited to this adventure because he once had a strong friendship with another Jedi, Rael Averross, that has been serving the young queen of Pijal. The two have a deep connection because they were both once apprentices of Dooku. Averross has specifically requested Qui-Gon’s assistance. Both Qui-Gon and Obi-Wan know their duty and put their differences aside to journey to Pijal for what might be their final mission as master and apprentice.

Thus begins one of the best stories ever penned in the Star Wars universe.

The plot is rich and the character development is handled masterfully. There are parallels that simply infest this novel. The story arch touches on Jedi Master and Padawan relationships in both the past and present. Dooku’s relationship to a young Qui-Gon and how the adult Qui-Gon Jinn came to understand and respect the Jedi prophecies is addressed. The relationship between Rael Averross and his own Padwan runs in parallel to Obi-Wan and Qui-Gon’s partnership. The examples of ultimate failure and the tragic feelings brought on by them explain so many motivations that are beneath the surface of this novel. It is a beautiful thing to read. There is a rich commentary about slavery and how giant corporations use people. Czerka Corporation figures strongly in the plot, and the influence it has on the government of Pijal is a central issue of the story. I particularly found the question asked by a secondary character to be incredibly poignant. When asked why Czerka enslaves sentient species when droids would be more efficient, the cold answer is simple: “Because it can.”

This type of social commentary strikes home and holds a mirror to real-world situations. My own home in the Midwest can sometimes feel devoid of opportunity. So many must rely on factories for employment because there are simply no other opportunities available. In a sense, this is a different type of entrapment that is necessary for survival. Normally, a Star Wars novel does not delve into such deep themes but Gray’s work does it fantastically. In addition to strong themes, there are secondary characters that are easy to fall in love with. Gray has a way of introducing new individuals to her story that should inspire any series reader. 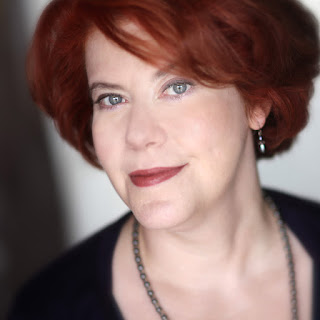 Gray manages to do all of this while weaving a fantastic tale that has a tremendous amount of heart and soul. She makes these settings and characters come alive. Her references are on point. One of these is intentionally obvious. In the prequel movies, we are told how much Obi-Wan hates flying. This is not the case at the beginning of this novel. Obi-Wan is a huge fan of flying almost anything he gets his hands on. This is referenced several times. As a reader and fan-boy, I saw this set-up coming and was almost tempted to be put off by it. However, when the pay-off comes, it is one of the finest and most hilarious moments in the book. I laughed like a maniac and remained grinning for a long time afterward. Gray has spun a tale worthy of this setting and these wonderful characters. The powers that be should take notice and contract Ms. Gray to do as many Star Wars novels as they can get her to agree to write. She gets this setting like so few do. Her voice seems embedded in everything that makes me love this property.

In addition to the print version, the unabridged audiobook is wonderful with fantastic sound effects and an excellent dramatic reading by Jonathan Davis. Davis delivers a magnificent rendition of Qui-Gon and Obi-Wan’s voices. All his voice-work is a cut above. If I were to complain about anything, I would call his ability to impersonate Yoda into question. However, even this is far above average. This book can be enjoyed either way one prefers. Frankly, this New York Times Bestseller needs even more recognition than it has already gotten. This is the Star Wars story you have been looking for!