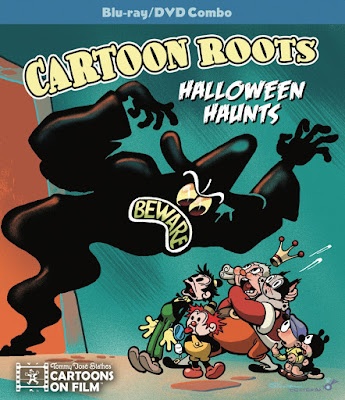 Cereal At Midnight welcomes guest-contributor Brian Trash for this review of the Cartoon Roots: Halloween Haunts classic animation collection! Stay tuned for more recommendations from Brian in the coming weeks!


There's plenty of ghosts, skeletons, and haunted houses. There's Koko the Clown, Felix the Cat, Pete the Pup, and more, with the talents of Walt Disney (Mickey Mouse), Max Fleischer (Betty Boop), Walter Lantz (Woody Woodpecker), to name a few. From silent cartoons to talkies, from stop-motion to live action with superimposed animation.


The collection begins with The Haunted Hotel (1907) and concludes with Bold King Cole (1936) in color with Felix the Cat. There's a total of 16 shorts, uncensored, as they were originally shown in theaters, and some of the cartoons contain racially insensitive content.
Here's a few cartoons I've spotlighted: The Haunted Hotel (1907) directed by J. Stuart Blackton, starts off with some simple animation of a house turning into a grinning face and then live-action with special effects and stop-motion. A traveler enters the haunted hotel and everything starts to move by itself!

Out of the Inkwell: Ko-Ko See Spooks (1925) supervised by Max Fleischer and directed by Dave Fleischer. The real life Max Fleischer draws a haunted house, the animated Ko-Ko the Clown's hat blows off into the house. He bribes his dog, Fitz, to retrieve his hat for 2 bones. Fitz yelps for help and Ko-Ko runs in the haunted house!
Alice Comedies: Alice's Mysterious Mystery (1926) directed by Walt Disney and Ub Iwerks. When a bear and a mouse kidnap the town's dogs to turn them into sausages, detectives Alice (child actor, Margie Gay) and Julius, a cat, are on the case.
Hot Dog Cartoons: Pete's Haunted House (1926) directed by Walter Lantz. While Pete the Pup sits in his little house, smokes his pipe, and reads a book about spooks, Walter Lantz decides to pull some scary pranks on him.
Snap the Gingerbread Man: The Witch's Cat (1929) produced by Kinex Films. A stop-motion animated short about a witch's cat who wants to eat Snap the Gingerbread Man. The witch turns Snap into dough and then the cat chases him until he re-bakes himself.
Aesop's Fables: The Haunted Ship (1930) directed by John Foster and Mannie Davis. During a lightning storm, Waffles the Cat and Don Dog's plane ends up underwater. They discover Davy Jones' sunken ship, which is haunted with skeletons!

This is another amazing collection by Tommy Jose Stathes, highly recommended for avid cartoon enthusiasts. This is history and deserves to be preserved, so much early animation has been lost.  For years Tommy Jose Stathes has been collecting film of cartoons from the 1900s to the 1940s. Even as a young child he had an interest in early animation. He started his own label, Cartoons On Film, which has already released four blu-rays thus far. He also shares his 16mm collection once a month to the public. His next event, Cartoon Canival: Fright Fest, is October 26th in Brooklyn, New York City. For more information: www.tommyjose.comhttps://cartoonresearch.com/index.php/category/cartoons-on-film/
https://www.facebook.com/groups/205685270704/ Cartoon Roots: Halloween Haunts blu-ray/dvd combo is available on Amazon HERE By Brian Trash