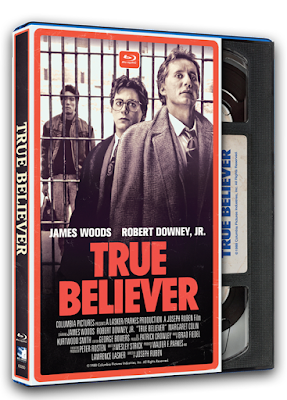 "Someone got away with murder...until now!"

1989's True Believer has arrived on Blu-ray from Mill Creek Entertainment as part of their growing "Retro VHS" title library, which we love for combining high definition transfers with an old school aesthetic. Prior to screening this title for the purposes of this review, I had never seen the movie, which is a legal drama starring James Woods as Eddie Dodd, a down-on-his-luck civil liberties lawyer and Robert Downey Jr. as his young, idealistic protege. Someone has been murdered, and the person who has sat behind bars for the crime claims he didn't do it. When Woods begins to investigate the case, he discovers a cover-up that goes higher than he could have possibly imagined.

James Woods gives a very volatile,  scene-chewing performance that often seem larger than the movie that he's in, and at times comes across as both humorless and overly-intense. He plays a pot-smoking former hippie who is jaded and bitter at the direction his career has taken. Gone are his glory days of defending innocent clients in search of justice, replaced instead by drug dealers that he knows are guilty but represents anyway to pay the bills. 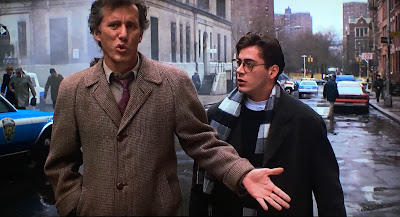 Thankfully, Robert Downey Jr. is our anchor to reality, serving as the conscience of the film and our connection to terra firma. For those who aren't familiar with the actor's work prior to his blockbuster success with 2008's Iron Man, it's worth mentioning that Downey has always had the dry, slightly-dangerous charm that made him such a great fit for the role of Tony Stark. That outsider image is on full display in True Believer, though he's more of a supporting player here to James Woods. There are also a handful of talented Hollywood character actors that pop up throughout the movie. Luis Guzman (Traffic, Boogie Nights), Margaret Colin (Independence Day), and even Gerry Bamman, the actor that played Uncle Frank in the Christmas classic Home Alone, have screen time here. 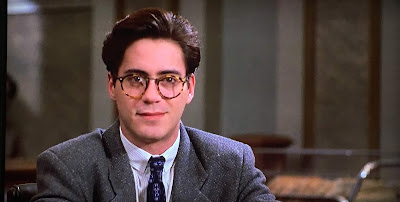 The most notable supporting role--and undeniably the best performance in the film--comes from Kurtwood Smith, the actor who played the bad guy in Robocop and who millions of people watched each week on TV as Eric Foreman's dad in That '70s Show. Smith plays the opposing attorney, and he's as cold and ruthless as they come. This movie was released years before Jack Nicholson shouted "You can't handle the truth" in A Few Good Men, and Kurtwood Smith showed us all how a strong, powerful courtroom performance could be delivered. 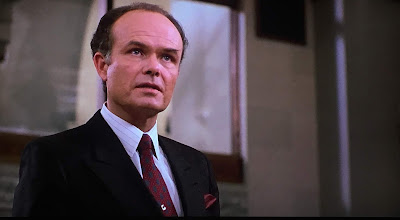 I would be remiss in discussing True Believer to not mention James Woods' hairstyle in this film, which is really the only thing in the movie that hasn't aged particularly well. Woods sports a curly ponytail with short hair on top, fashioning a unique look out of some strange, permed mullet. It truly has to be seen to be believed, and it's actually hard to believe that it made it to film. The character Woods plays is a counter-culture guy who makes his living in the establishment, so the ponytail is our indicator that he doesn't play by society's rules, despite being a part of the system. Instead of looking like a symbol of rebellion, though, it ends up looking like he has a murdered poodle sitting on his head. Don't let the hairstyle scare you away from the film if you haven't seen it; if anything, it's reason to watch it. 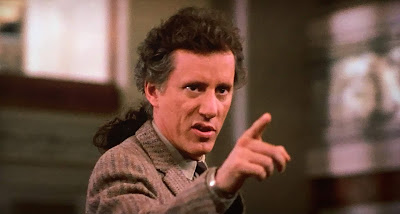 True Believer is directed by Joseph Ruben, a workman-like filmmaker who gave us Dreamscape, Sleeping with the Enemy, and The Good Son. His films all have a style and feel that I would describe with words like "solid" and "consistent." In fact, this movie was nominated for several awards and represents a high point for '80s courtroom cinema, which would soon be devoured with adaptations of legal thrillers adapted from the works of author John Grisham, whose first novel was published the year this film was released. Viewers with a long memory might recall that True Believer made enough of a splash upon its release that it was given a short-lived 1991 television spin-off, Eddie Dodd, created by the screenwriter of True Believer, Wesley Strick. Treat Williams played the James Woods role in the television series, which only lasted seven episodes. 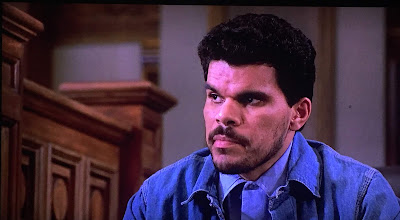 Mill Creek Entertainment's Blu-ray offers a solid high-definition transfer that features nice film grain and realistic flesh tones. The movie is heavy on browns and yellows, with lots of wood textures and artificial lighting, as much of the film takes place in courtroom and offices, and that is reflected in the transfer, which seems to accurately represent the drab and dark tones of the film. There are no special features, but English subtitles are included. 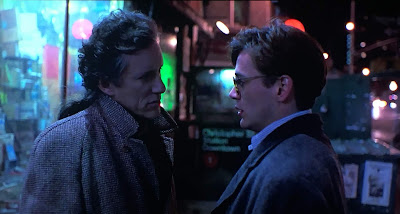 True Believer is a solid courtroom drama with an over-the-top performance from James Woods, who clearly comes from the "more is more" school of acting. Thankfully, we have more grounded turns from a young Robert Downey Jr., who shows a lot of promise as a future lead, and Kurtwood Smith, who commands the screen with authority, confidence, and some of the best eyebrows in the business. Mill Creek Entertainment's Blu-ray has solid picture quality and has once again rescued a studio catalog title that had been forgotten in the HD era.