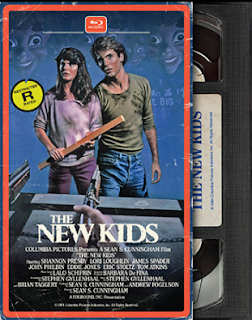 These New Kids have the fright stuff.

The New Kids is one of the many gems from the 1980s that was a staple of the video store era, but seems to have largely slipped from the collective conscience in the digital age. All that may hopefully change now that the film has arrived on Blu-ray in North America thanks to Mill Creek Entertainment, who has released it as part of their ongoing Retro VHS slipcover collection.

The premise of The New Kids feels startling in today's world of anti-bullying and hyper-PC behavior policing. Shannon Presby (in his only feature film role) and Lori Loughlin (formerly one of America's sweethearts and co-star of Full House) star as a brother and sister who find themselves orphaned at the beginning of the movie. Adrift and without roots, they're sent to live in Florida with some relatives who run a farm with a dilapidated Christmas-themed gas station and carnival on the property.

What they don't account for is that they're "the new kids," and the local restless youth aren't going to accept them easily. Playing the cocaine-snorting, doobie-smoking rebels without a cause are James Spader (Tuff Turf, The Blacklist) in what appears to be his earliest bad guy role, John Philbin (Point Break, The Return of the Living Dead), and a host of young character actors who are determined to make life miserable for the siblings who have just arrived in town. Somewhere in the mix is a timid Eric Stolz, filmed around the same time as his appearance in the Oscar-winning film Mask, opposite Cher. 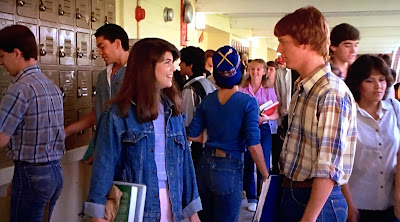 The movie starts somewhat realistically, with the typical high school bullying scenarios slowly escalating into an all-out war, propelling the story from After-School-Special territory into something that I'm not sure I would call horror, but that's close enough. Sean S. Cunningham, the man behind the original Friday the 13th film from 1980, directs this tale of school rivalry gone psycho, and a lot of his slasher movie calling cards can be found in this film. The extreme violence is sure to be a hit with horror hounds, and the slasher movie morality rules do indeed apply to this movie as well.

It's also worth pointing out that Cunningham has taken heat, especially in the last few years, for his use of real animal violence. In Friday the 13th, a snake is assaulted by a machete. In this movie, a chicken and (maybe) a cow lose their lives in an attempt to unsettle the audience. I'm not raising a stink about these elements, especially since the film takes place on a farm where this sort of thing happens every day, but it does show something of a pattern in the director's filmography. New viewers, be prepared, but don't let it put you off of the film. The movie is actually pretty fantastic from an entertainment standpoint, with the climax taking full utilization of the creepy-weird country Christmas carnival that screams Florida kitsch. 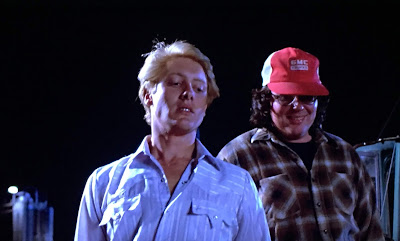 For a movie of this type, whatever its type actually is, The New Kids is an engaging experience. It walks the line between drama, comedy, suspense, and horror lithely, thanks to a screenplay by Stephen Gyllenhaal (father of Jake and Maggie) and also thanks to Cunningham's direction. Those looking for 1980s cheese will find an abundance in this movie, which actually OPENS with a training montage featuring Tom Atkins (Halloween III: Season of the Witch), then has the guts to give us ANOTHER training montage at the half-way point of the film! A suspense drama with horror elements and TWO training montages? Sign me up! At the risk of sounding like an old man, I admire that movies used to be able to be whatever they wanted to be and didn't care what box a studio needed to put them in to market them.

The film is also packed with cool eighties music, including a song called "Edge of Survival" that was written and performed by Jess Harnell. In case that name does not ring a bell, Harnell has been a popular voice actor AND a rock and roll singer for decades. He voices Wakko Warner on The Animaniacs in addition to scores of other voice acting roles, and we're big fans of his musical project Rock Sugar, which combines covers of classic pop songs mixed with rock and metal standards. The score itself is provided by Michael Rubini and the great Lalo Schifrin, composer of the iconic Mission: Impossible theme. 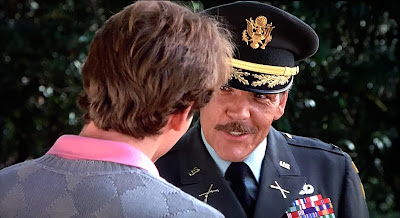 In several ways, The New Kids predates 1988's Heathers in that it presents the crazy world of school bullying and peer pressure as a very real, very dangerous thing with permanent consequences hanging in the balance. Every teenager feels like high school is life or death, but in The New Kids, it actually is. The movie is ultimately a dark and violent fantasy for anyone who ever got pushed too far and wanted to put a stop to the pressure once and for all. The movie somehow manages to do this in a way that isn't transgressive (especially in today's atmosphere) and is actually a whole lot of fun.

Mill Creek's Blu-ray presents the film in HD with a transfer that feels very true to the mid-80s low-budget roots. Grain is constant, giving the movie a cool film-like, drive-in vibe that benefits the viewing experience. There are no special features, but optional English subtitles are included. The slipcase features the original VHS cover art, while the inner art on the Blu-ray case itself features alternate artwork. 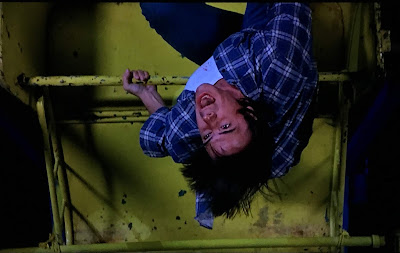 The New Kids manages to tell a very dark story in a way that feels more escapist and fantastic than gritty and realistic, and that's meant as a compliment. The climax in the carnival is one of the better examples of such scenes, made memorable in part by the run-down nature of the rides themselves and the isolated setting of rural Florida. Horror fans will be pleased, but so will fans of bizarre eighties cinema. They don't make them like this anymore, which makes having this on our shelves that much more rewarding.