"The House of Hitchcock Collection" Coming to Blu-ray from Universal 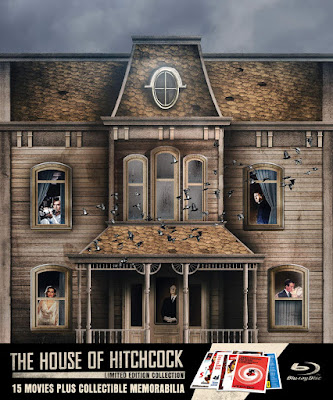 15 classic Hitchcock films from Universal are headed back to Blu-ray in a new special edition deluxe package including lots of cool collectibles and bonuses!

Universal has announced "The House of Hitchcock Collection," a 17-disc Blu-ray/DVD set that features 15 Hitchcock film classics, plus seven episodes from TV's Alfred Hitchcock Presents and three episodes from TV's The Alfred Hitchcock Hour. Hitchcock fans will be aware that the disc content is exactly the same as the 2017 Blu-ray/DVD set Alfred Hitchcock: The Ultimate Collection. The new 2019 edition is notable, however, for the inclusion of lots of goodies and collectibles, including mini-posters, photo-copies of Hitchcock's letters, a booklet about the films, blueprints of the iconic house from Psycho, Bates Motel stationary, and even a Bates Motel "Do Not Disturb" door sign! The discs are housed in four multi-disc cases that align to form a mural of the Master of Suspense himself, and all the contents are stored inside the "House of Hitchcock,"which is a visual love letter to the director and his most famous movies! 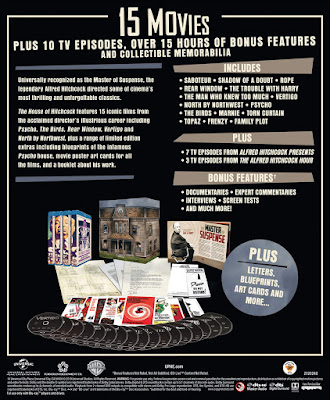 The films included in the set are:

"The House of Hitchcock Collection" arrives on October 1st and has a retail price of $99.98. It is available for pre-order now!