Review: Popeye the Sailor: The 1940s Volume 1 and 2 Blu-ray from Warner Archive 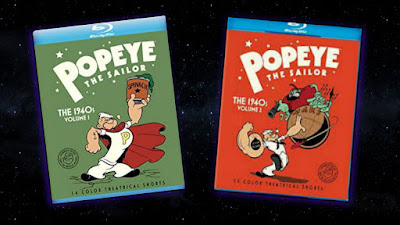 Everyone's favorite spinach-snacking sailor has arrived on Blu-ray courtesy of our friends at Warner Archive, and just in time to celebrate the character's 90th Anniversary!

Popeye the Sailor: The 1940s Volume 1 and 2 chronicle the "war years" of the legendary character and his eternal struggle to win the affections of Olive Oyl by overcoming the brawn of his rival, Bluto. Popeye was created by Elzie Crisler Segar in 1929 and popularized in the King Features comic strip, but the cartoons, first created by Max Fleischer in the 1930s, seem to have been what really cemented the legacy of the character for future generations. 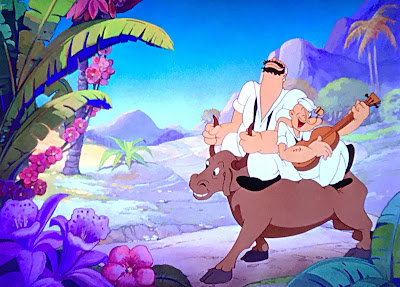 Those Fleischer toons have been preserved on three DVD sets from Warner Home Entertainment (now available as MOD titles from Warner Archive), but these shorts from the 1940s mark the first time that Popeye has ever been viewed on Blu-ray. Frankly, Popeye in HD is a revelation.

My exposure to Popeye started with syndicated television as a kid, and later I was able to watch his adventures on DVD sets that compile dozens--if not hundreds--of cartoons in one place. I'm used to Popeye cartoons looking a little hazy and dark, as most cartoons that are nearing 70 or 80 years of age are bound to appear. 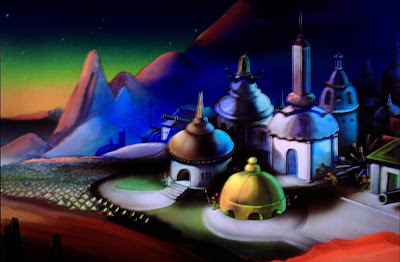 But Warner Archive's Blu-rays are stunning. It's as if gauze has been lifted after all these years. Colors are impossibly bright, reminding us that these cartoons were gorgeous when they were first produced. The new HD remasters are sourced from 4K scans of the original nitrate prints, and they look better than we could have ever hoped. Some of my favorite cartoons in these two volumes are the shorts that take Popeye to far away environments, such as 1944's "We're on Our Way to Rio" and 1946's "Rocket to Mars" (probably my top pick), which immerse the viewer in the lush color and gorgeous hand-painted scenery of exotic locales that can only truly exist in top-notch animation, now made even more impressive by the eye-popping restoration. 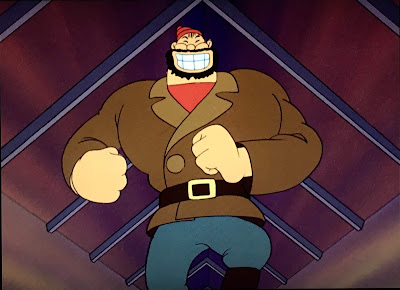 When preserving classic animation, some studios have a tendency to erase all grain entirely (I'm looking at you, Mr. Mouse), but Warner Brothers has thankfully taken the opposite approach and left all the fine grain intact, thus ensuring that these shorts retail a very film-like appearance that truly represents their origins as theatrical attractions.

Another thing that's commendable is the complete lack of censorship. Some of these shorts do indeed contain content that has not aged well (to say the least), yet, rather than suppress these elements and bury the cartoons, Warner has chosen to run this disclaimer at the beginning of each disc: 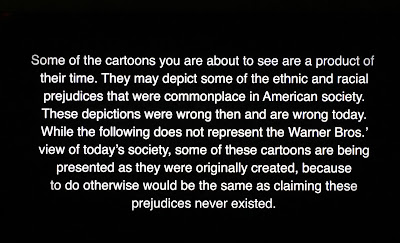 This is our preferred method of pop culture preservation, allowing the audience to view the content while also distancing the presenters from any liability or endorsement. Some may decry the inclusion of the disclaimer, but we'd much rather have this brief notification than have these works of art locked in a vault where no one can ever see them or learn from them. Warner Brothers has taken a similar tactic with some of their more dubious Looney Tunes shorts, and we applaud this aversion to censorship while also addressing the nature of the material itself. 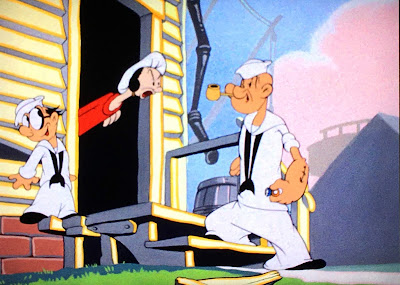 Now let's talk about the cartoons! They come from the second era of Popeye. Max Fleischer's involvement had come to an end, and these shorts were made and distributed by Paramount's Famous Studios. Given that these films were created during and after the United States' involvement in World War II, they do somewhat reflect that in their stories. Popeye and Bluto are often dressed in traditional white U.S. Navy uniforms, which is a departure from the black, red, and blue attire that Popeye wore throughout the thirties. Similarly, many stories begin with our characters either on a Naval ship or on what appears to be shore leave. Popeye, it seems, enlisted when his country needed him. It should also be noted, though, that not all stories find our everyman hero bound to this familiar setting.

The cartoons also seem slightly more tame than those produced under Max Fleischer, but that's not to say that they don't get a little wild, both figuratively and literally. Adventures take place in the Klondike, at the circus, and as previously mentioned, even in outer space, and there are traces of playful ribaldry that would become even more rare as Popeye moved out of the decade and into a more kid-friendly era. It's important to remember that cartoons made during the Golden Age of Hollywood were not aimed at children, but rather at all audiences, especially adults. On that note, many of these shorts contain sly and subversive elements that are actually delightfully mischievous. 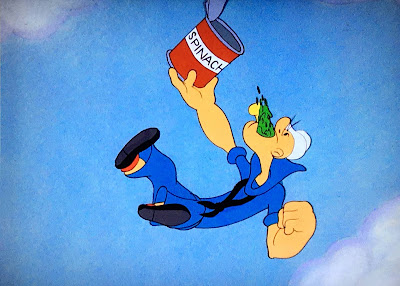 Cereal At Midnight is incredibly grateful to Warner Archive for investing in the preservation of these timeless cartoons, which have never looked better than they do on these new discs. Here's hoping that these collections are embraced by the film community so that we may one day see the entire Popeye catalog on Blu-ray, safeguarding the art of the past for new fans to discover, learn from, and enjoy!