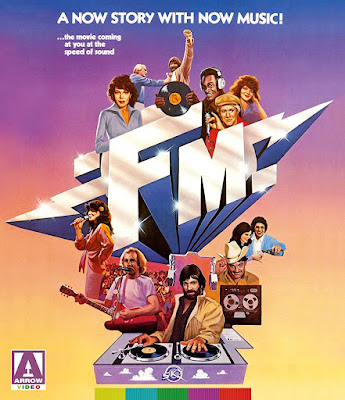 If ever a movie was tailor-made for Cereal At Midnight, it's 1978's FM. The film chronicles the inner workings of an FM rock radio station in the late seventies and the struggle to maintain freedom and autonomy in an ever-increasing corporate radio landscape. The personalities and on-air antics are taken from actual radio history, inspired predominantly by the men and women who ran the airwaves of San Francisco's KMPX station in the late sixties, as well as Los Angeles' KMET. These pioneers blazed remarkable trails across pop culture when the FM format was still largely unregulated and free from the commercial aspects that had overtaken AM radio. FM is about integrity, rock and roll music and attitude, and rebellion against any establishment that doesn't value those things. The film is also packed wall-to-wall with vinyl tracks, and maintains a delightful analog spirit. There's life between the grooves.

Perhaps because the film was created during the mid-to-late seventies, there's a sort of existential approach to the story. For most of the film, there isn't a whole lot of plot; we meet and follow the colorful radio station characters in their everyday lives, both on and off the airwaves. Michael Brandon (Argento's Four Flies on Grey Velvet) plays Jeff Dugan, the hot blooded station manager who's trying to balance ratings with his principals. Eileen Brennan (Clue) is Mother, the elder DJ who has seen it all and has become tired of the game. Cleavon Little (Blazing Saddles) portrays The Prince of Darkness, a smooth soul DJ who guides listeners through the night time hours. Martin Mull (again, Clue) is Eric Swan, the wildest personality of the station, complete with groupies. Cassie Yates (Rolling Thunder) plays Laura, who brings desirability, passion, and heart to the booth. Alex Karras (TV's Webster) plays Doc Holiday, a man who is quickly being left behind in a previous era because he has not adapted to the changing times.

The similarities between FM and television's WKRP in Cincinnati (which debuted in September of 1978) are undeniable, with some of the characters appearing to be identical to each other in personality and even appearance. This is partly because both stories were based on the real-life experiences of KMET-DJ Jim Ladd, and, remarkably, it appears that neither FM nor WKRP seems to have been directly influenced by the other. Both shows are a product of what was happening in radio zeitgeist circa 1978 as album-oriented rock radio was falling more and more under the thumb of commercial investors and huge media conglomerations.

For the first half of the film, the movie is basically the daily grind of these station employees and the adventures they get into because of their jobs. Our characters cover local concerts, which gives the film the opportunity to present full live performances by Jimmy Buffett (prior to his Parrot Head fame) and Linda Rondstadt. The Rondstadt performance is particularly notable because her guitarist at the time was Waddy Wachtel, a Los Angeles session musician who played with just about every notable act during this period of his career. That's him on guitar in Stevie Nicks' classic "Edge of Seventeen," and you can also hear him on records by Fleetwood Mac, Joe Walsh, and The Rolling Stones. Seeing him perform live at a real concert is a treat.

But around the half-way point, FM starts to become about something else. All throughout the film, station director Jeff Dugan has wrestled against advertisements for the U.S. military on his airwaves. When he finally puts his foot down, the corporate hammer falls and the film begins to be about something else. We see our band of misfits unite against a common threat, and the focus becomes the people versus "the man," free radio versus the establishment. The latter part of the film is very much a statement against the soulless tinkering of corporate radio (or big business in general) and was inspired by a legendary real-life battle that occurred in San Francisco over the freedom of the KMPX airwaves and a real walk out that occurred on air. Shades of this battle for youth and freedom against censorship and monopoly can be seen in so many movies that would follow, from Airheads to Empire Records, perhaps proving once and for all that the song remains the same and only the musicians change.

FM is the only theatrical film to be directed by John A. Alonzo, a man who spent most of his career as a cinematographer, earning an Oscar nomination for his lensing of Chinatown. It's somewhat ironic that this movie about the voice and power of the people is actually a major studio movie, coming from Universal Pictures and featuring a slew of major label recording artists on the soundtrack. Instead of underground music from the likes of The Ramones or the Velvet Underground, the soundtrack for FM leans more into slick and shiny popular rock acts like The Eagles, Bob Seger, Steve Miller Band, Boston, Billy Joel, and Steely Dan, with a song that won them a Grammy. We also get non-performing appearances in the film by recording artists Tom Petty and the Heartbreakers and REO Speedwagon, though their records pop up in the film as well. As noted in one of the special features on the stellar Blu-ray edition from Arrow Video, this is a movie filled with punk rock attitude, yet featuring no punk rock music whatsoever.

Speaking of the Arrow Video Blu-ray, it's a must-own for any movie or music fan. The film has been scanned from the original elements by Universal and comes with a choice of uncompressed 2.0 audio or 5.1 DTS surround sound. The special features are where the disc really shines, with over an hour of new extras, including a new video interview with Michael Brandon, a video interview with Ezra Sacks, the writer of FM, and the aforementioned feature with film and music critic Glenn Kenny that analyzes the music of FM and contextualizes the movie in the atmosphere of 1978. There's also an isolated music and effects track, photo and promotional image gallery, reversible sleeve, and a lengthy printed essay by Paul Corupe which has led me to no fewer than five books about the rise and fall of independent FM rock radio in the sixties and seventies.

For all the joy and rebel fire of the movie, it's also a bittersweet tale; FM reflects a battle that would eventually be lost, as corporate radio finally succeeded in owning not just a piece of the market, but the entire radio dial. Most of America's radio stations are now owned by one company. As Tom Petty would sing on the title track of his 2002 album The Last DJ:

FM is the story of those DJs and their last stand. It's a tale wonderfully told, with warmth and humanity, humor and improvisation. The Blu-ray from Arrow is indispensable, offering an incredibly deep look at the film and its context in the FM radio revolution. For those looking to further explore the wild true story of stations like KMPX and KMET, there's no better place to start.