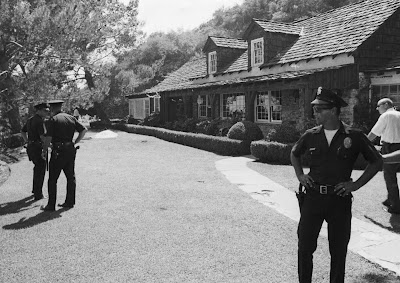 Today marks the 50th anniversary of the Manson Family Murders, perhaps the most infamous and shocking true crime event of modern times. In the early morning hours of August 9th, 1969, three intruders broke into 10050 Cielo Drive, the Los Angeles home of Roman Polanski and his pregnant wife, actress Sharon Tate. Polanski was out of the country working on a film, but the five people who were there that night--Jay Sebring, Voytek Frykowski, Abigail Folger, Steve Parent, and Sharon Tate--were brutally slaughtered in a mass murder filled with violence so shocking and over the top that it still horrifies us today. The following day, two more victims, Leno and Rosemary LaBianca, were killed in a similar fashion miles away.

By the time the sun came up on August 10th, Hollywood was in a panic. It wouldn't be much longer until the entire world new the name of Charles Manson and what he had done, as the Manson Family Murders became a part of our collective nightmares.

On this anniversary, we choose not to glorify Manson or his followers, though the story is undeniably fascinating. The Manson Family and their heinous actions remain the subject of countless books, TV documentaries, and feature films, the most recent of which is Quentin Tarantino's Once Upon a Time in Hollywood, which takes an entirely unique (and controversial) approach to the events of that evening.

Instead of focusing on the evil details, we choose to commemorate those who lost their lives on a hot August 9th, 50 years ago. We honor the memories of those who would very possibly still be among us today if their flames had not been snuffed out by a cold and vicious wind, fueled by madness. We honor Sharon Tate, gone at just 26 years of age. She left behind a small but vital collection of films that fans will cherish, though far more than her career was stolen from her that night. But what's important is that we remember these people and the lives they lived. Half a century later, we have not forgotten.
10050 Cielo Drive 1969 Abigail Folger Charles Manson Jay Sebring Manson Family Roman Polanski Sharon Tate Steve Parent Voytek Frykowski