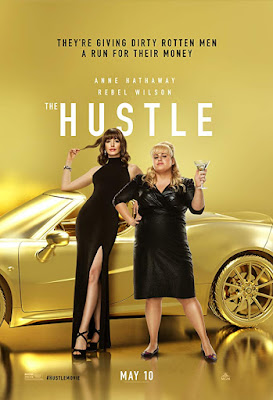 One would be forgiven for not immediately realizing that The Hustle is a straight-forward remake of 1988's Dirty Rotten Scoundrels, albeit with a female-led cast. There's little in the advertising to indicate this fact aside from the tag line on the poster, which reads "They're giving dirty rotten men a run for their money." And yet, not much has changed. Instead of Michael Caine as the posh British con artist, we have Anne Hathaway, sporting a deliberately-dodgy English accent. Instead of Steve Martin as the wacky comic relief, we have Rebel Wilson occupying much the same role. Aside from the gender switch, the plot and character dynamics are virtually identical: two odd-couple career swindlers place a bet to see who can rip off a wealthy business person by a certain deadline. To achieve this, our characters will have to use every trick in the bag.

I enjoyed The Hustle, but I also realize that there's very little that makes it unique, especially since it's now the third telling of this story, and arguably the most disposable (1964's Bedtime Story starring Marlon Brando, David Niven, and Shirley Jones was the first). I find Rebel Wilson to be entertaining with her "I can't believe she just said/wore/did that" schtick, but if you aren't on board with it, this isn't the movie that's going to win you over. I think the actress has a lot of talent beyond the obvious fat jokes and low hanging fruit, but I'm not sure we've seen what she's capable of yet. This movie does give her the opportunity to tap into more emotional territory, but substance is fleeting as the movie is always in search of its next gag. This film is also my first exposure to Alex Sharp, a relative newcomer to movies, but an actor who has won a Tony Award for his work on Broadway. Here he plays the wealthy business mogul that our two leads target in their wager. 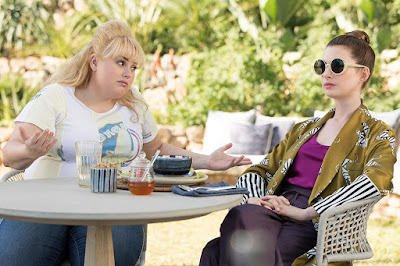 The main selling point of The Hustle is Anne Hathaway, who transforms this film into a veritable showcase of her abilities. I thoroughly believe that Hathaway is the modern generation's Julia Roberts; the camera loves her, the audience adores her, and there's really nothing that seems beyond her talent and range. In this film alone, Hathaway manages to convincingly affect at least four different accents, play the straight person in a wacky comedy duo (the Martin to Wilson's Lewis), bring loads of class, glamour, and sex appeal, and still root her performance in enough mystery that we're never sure if we're seeing who her character really is or simply another layer of the disguise. In the age of social media, few Hollywood personalities still retain old-fashioned star quality, but Hathaway has an elegance and a charm that sets her apart from the crowd. This movie is wise to tap into that, playing to her strengths while allowing her the freedom to have fun with her role.

Unfortunately, aside from Hathaway, the movie is fairly average. That doesn't mean it isn't enjoyable; while the laughs don't always land, they do come often, and I found myself chuckling quite a bit at the absurdity of it all. The movie feels longer than it actually is, with a droopy middle section and a few vignettes that occasionally feel tedious. The script is adapted from the Bedtime Story screenplay by Jac Schaeffer, a writer I'm not familiar with, but who is currently working on the upcoming Black Widow (MCU) film as well as an episode of the WandaVision Disney Plus series. This is also the feature film directorial debut of Chris Addison, a television actor/writer/director who has worked on shows like Veep and Doctor Who. 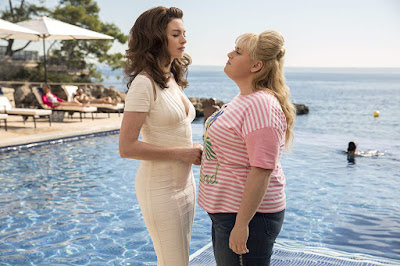 I don't want to be too harsh on this movie, because I really did have a fun time watching it. Hathaway and Wilson actually have great chemistry together as an odd couple, and both performers bring a particular (although very different) quality to the film that makes it quite watchable. The cinematography (filmed mostly in coastal Spain) is absolutely gorgeous, and the noteworthy score by composer Anne Dudley (The Crying Game) feels like a throwback to the kind of music movies USED to have. I feel certain that I'll eventually add this one to my own collection and revisit it from time to time because it's just fun; and sometimes fun is enough.