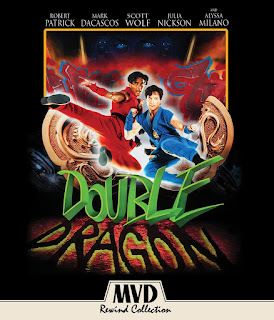 The fourteenth entry in MVD's "Rewind Collection" shines a spotlight on a movie that truly deserves a second look.

1994's Double Dragon is the big-screen adaptation of a classic video game franchise that followed two brothers--Billy and Jimmy Lee--fighting their way through mean city streets in an attempt to rescue the lovely Marian from the clutches of her kidnappers. The feature film version expanded the story, put the very fate of the world at stake, and delivered a scenery-chewing villain. Yet, Double Dragon was not a box office success, despite a big marketing push in comic books and video game magazines, and subsequently developed a reputation as a flop. I saw the movie upon its VHS release in 1995 and was disappointed. That was 24 years ago, and I hadn't watched the movie, or really even thought about it, since then.

Fortunately, we're living in a time that is steeped in nostalgia, and what was a failure in 1994 can now be great entertainment decades later. MVD's Rewind Collection serves as perfect midnight movie programming and allows us the opportunity to enjoy and rediscover a particular kind of film that has now vanished but that still holds immense entertainment value, sometimes ironically, sometimes with no irony at all. By presenting these video store staples in beautifully-restored HD majesty, digging into the production history of how they came to be, and celebrating the qualities that defined an era of entertainment, we're able to appreciate these movies in a way that we never could before. 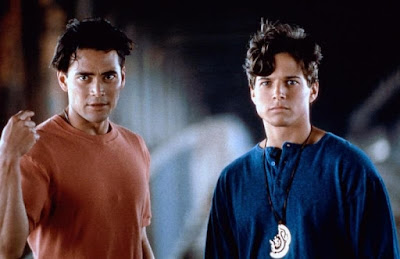 Such is the case with Double Dragon. From the moment this title was first announced by MVD, I've been both curious and nervously excited about catching up with Billy and Jimmy again after all these years. I'm happy to report that Double Dragon is EXACTLY the movie that I remember it being, but that time has made it so much more charming, fun, and entertaining.

The plot of the film is a bit different from the video game, which--to be fair--didn't really require much of a story. In this version, Billy Lee (Party of Five's Scott Wolf--not a martial artist) and Jimmy Lee (Brotherhood of the Wolf's Mark Dacascos--an 8th degree black belt) face off against a larger-than-life tyrant named Koga Shuko (Robert Patrick of Terminator 2 fame), who is bent on collecting two halves of a mystical medallion that will allow him to control...well, everything. Far from the damsel in distress is Marian, played by Alyssa Milano (from...well, all of the nineties), who is part of a street gang that wants to help Billy and Jimmy stop Koga Shuko from ruining everything. Julia Nickson (Rambo: First Blood Part II) serves as a mentor and guiding light to the brothers. 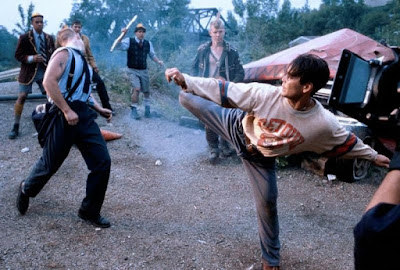 The basic premise of the film is relatively simple, and not all that different from the standard video game movie fare such as Street Fighter and Mortal Kombat: our heroes have to fight waves of bad guys until they get to the biggest bad guy. But what sets Double Dragon apart--and what makes it really interesting now--is basically everything else. The movie takes place in a futuristic 2007, where some sort of national or global conflict has taken place (maybe World War III). In the spot where Los Angeles once stood, New Angeles now exists. Vehicles run on trash for fuel, and there's a Mad-Max post-apocalyptic aesthetic and undercurrent running through the entire film. Frankly, the world building that goes on in this movie is stunning, and the future that it predicted decades ago is, in many ways, shocking in its accuracy of our modern society. Cops wear body cameras, technology has integrated itself into everyday life, and virtual reality is a means of escapism from the mundane and routine.

The visuals of a ravaged Los Angeles are powerful. We see a dilapidated Grauman's Chinese Theater, a collapsed Capital Records building, and the Hollywood sign is in tatters. The high waters of the Hollywood River pay homage to the history of the Los Angeles River and provides a clue as to how much nature has reasserted its dominance in this new era. It all reminds me very much of the same world we see in the movie Demolition Man, another futuristic story from just one year earlier. Arguably, Robert Patrick's bleach-blonde hair even calls back to Wesley Snipes' signature look from that movie. 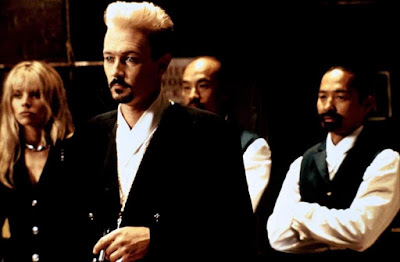 Lest we get too caught up in the backstory of it all (which the movie never really explores), there are huge set pieces and action scenes often enough that we never get bored or distracted. There are fights in junk yards, fights in warehouses, tournament battles, high speed car chases through darkened streets, high speed boat chases across the open water, and an overall pace that keeps things chugging along. And we haven't even mention the guy in the big rubber muscle suit.

In spite of all these elements (or maybe because of them), Double Dragon never quite comes together into a cohesive, compelling story. It has a tone that feels like it's constantly at war with itself. It's a post-apocalyptic action movie that is aimed at 11-year-olds, and those two things are at odds with one another. Robert Patrick gives the broadest performance in the film, but neither Scott Wolf nor Mark Dacascos are quite capable of grounding this movie. Alyssa Milano was probably the most experienced here and was quite a star in 1994, but even she's not enough to hold everything together. 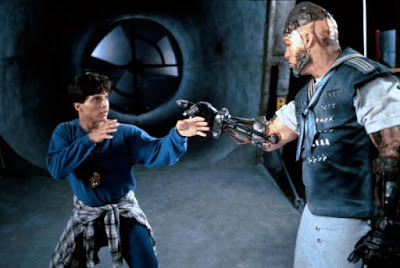 Which begs the question: what happened behind the scenes to lead us here? Thanks to the work of MVD, that question is not only touched upon, it's the focus of approximately 90 minutes of brand new special features that really dig into the production history. In a 67 minute documentary, the writers (one produced Breaking Bad and Better Call Saul and the other wrote and directed the cult hit Shoot 'Em Up) talk very frankly about their script, the frustration of the changes that were made by the studio executives and director (James Yukich), and the reality of the movie simply not living up to expectations. Here's a direct quote from one of the writers: "It's frustrating, because inside this movie there's actually an okay movie struggling to get out." Similarly, Producer Don Murphy (the live -action Transformers franchise) gets his own 20-minute-plus spotlight and basically says the same thing. He calls the movie "a child's nightmare...in a fun way," and admits that the movie doesn't really work, but that it has fun stuff within it. Stars Scott Wolf and Mark Dacascos also sit down in the documentary to talk about their time on the film, their hopes for the picture, and how they feel about it all these years later. Very cool stuff.

In addition to the new documentary and the spotlight on Don Murphy, we're also treated to an archival "Making Of" featurette, a second behind-the-scenes featurette, the pilot of the 1993 Double Dragon animated series (the entire series comes to DVD in April of 2019), a storyboard gallery, press photos, marketing and behind-the-scenes photo galleries, TV spots, the VHS Home Video trailer, the original theatrical trailer, reversible sleeve artwork, and one of my favorite MVD Rewind Collection extras, a collectible mini-poster. 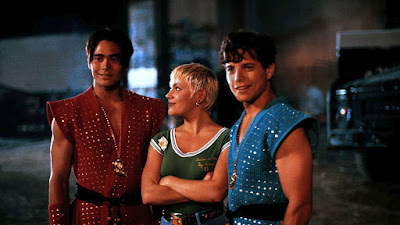 Double Dragon is a mess of a film, but it's a fascinating mess filled with big ideas. Let's also not forget that there wasn't a template for this kind of film in 1994, and that even now, over two decades later, video game movies still often struggle to succeed. Double Dragon was a pioneer in a sub-genre that endures, and it has built a cult audience since it first debuted. From a story conception that began with Paul Dini, the legendary writer known for his work on Batman: The Animated Series as well as for creating Harley Quinn, all the way to the disappointing box office and critical reception, the entire story of the movie is told on this fantastic MVD Rewind Collection Blu-ray. For nineties kids and those that grew up in the last great era of the video store, MVD's presentation of Double Dragon is absolutely worth adding to their collection. We are blessed to live in a time where such films are not only given high-profile restorations and releases (this movie has never looked so good) but are also accompanied by first-hand accounts from the people that created them in the first place. As for Double Dragon, this is the kind of presentation that Saturday nights were made for.