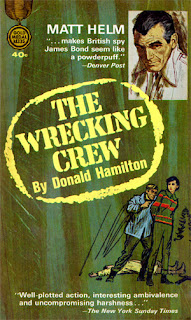 Counter-agent Matt Helm is back, and this time, the mission is clear: ASSASSINATION!

The first Matt Helm novel was a slow burn, with our titular counter-agent discovering that the quiet, suburban life he'd been enjoying during a time of peace was over and there was no going back.  By contrast, The Wrecking Crew, the second novel in the series, throws us right into the action. When the book starts, Helm--code name Eric--is already deep into a mission, this time in Sweden,which serves as quite a scenery change from the first book's American southwest. Right from the start, the objective is clear: Helm is tasked with assassinating a man named Caselius.

It can't be that easy, though. Helm must assume the cover of a nature photographer, out of shape and oblivious to methods of espionage and intrigue. This means that all the tough enemy agents and mercenaries that he encounters can never know how highly trained and deadly he really is, or his cover will be blown and the mission will be lost. This gives the story a real feeling of tension and stakes that wouldn't necessarily be there if Helm, aka Eric, were a guns-blazing one man terminating machine, like Don Pendleton's Mack Bolan: The Executioner. The emphasis at all times is on covert operations, deep cover, intrigue, and general spy shenanigans. At this point, making any comparisons to James Bond feel forced, rather than organic. These are two completely different characters with different temperaments, motivations, and skill sets. Matt Helm shoots people in the back. Matt Helm would just as soon you never knew he were there.

As with any good sixties spy story worth its salt, all the elements that we crave are here in good supply: foreign and exotic environments, beautiful women with dubious and questionable loyalties, over-the-top tough guys, high speed chases, a trail of bodies, and of course, an eccentric villain at the top. Donald Hamilton does a wonderful job crafting a story that is steeped in mystery, and he distributes just the right amount of information at just the right time. The Matt Helm novels are written in first person, from the perspective of Helm himself, but Helm doesn't always tell us everything he knows. In this way, Hamilton manages to keep us guessing about what Helm is or isn't aware of and how far ahead or behind any given situation the character actually is.

Hamilton has also done a good job of evolving the hero from the previous book. The character feels a little different, more clearly defined, and this is an improvement. The author seems to be learning the personality of his subject more than was apparent in the first book, with Matt Helm displaying a defined code of ethics. It shows evidence that Hamilton was finding the unique voice of the character, separating him from the dime-a-dozen spies and anti-heroes of late fifties and early sixties pulp fiction.

As with the first novel in this series, there is little here that feels superfluous. At just over 170 pages, the story flies by and gives us just enough information to tell the story. Chapters average about five pages, and it's easy to lose yourself for an hour or more into this world of counter-agents, assassins, femme fatales, jilted lovers, and shadowy figures. The mid-century spirit that I love so much (this novel was published in 1960) is present here, and the exotic locales provide for a compelling setting. I really enjoyed the first novel, but the second one really has me hooked on this world and this hero, a man willing to get his hands dirty, but also one who lives by a certain code. Honor, it seems, exists even among assassins.
1960 Caselius Dean Martin Donald Hamilton espionage Fawcett Publications femme fatale Gold Medal Matt Helm pulp fiction spy The Wrecking Crew Titan Books wetworks