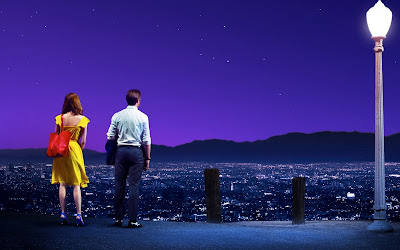 I am smitten by La La Land.

I tend to discover things in my own time. When it comes to high-profile dramas or "awards movies," for lack of a better term, I will put these films on the back-burner for an indefinite length of time. Sometimes I shy away from them for years, knowing that I need to see them, but not necessarily wanting to see them. I'm not quite sure why this is, but I suspect it has something to do with the cinematic establishment and my lack of patience for a particular type of film that gets rewarded at the Oscars each year. I also find that almost all movies play completely differently when separated from the hype machine, and I prefer to come to a movie cold and without expectation, which is next to impossible in our current climate of endless internet debate. Such is the case with La La Land, a movie that all my movie friends saw and appreciated, but that I avoided for the reasons I've just mentioned. Also, because I'm stubborn.

It turns out that I really did myself a disservice by waiting on La La Land, because I have completely fallen in love with this movie about two people who completely fall in love. Then again, maybe I've connected to it so deeply because I came to it blindly. The film tells the story of two characters, played by Emma Stone and Ryan Gosling, as they begin a romance in the City of Angels. It's a musical, inspired by the likes of Busby Berkeley and classics like Singin' in the Rain, while also remaining grounded in the here and now of modern Los Angeles, which is the third lead. As a big fan of classic cinema, I often find myself declaring to anyone willing to listen that Hollywood seems have lost the ability to tell a story with the same competence and grace that it has exhibited for over a century. What I mean by this is that we have entered a movie-making landscape in which everything seems tailor made for audiences with attention deficit disorder. Films are edited so that the camera cuts every few seconds, cinematography seems to have lost the eye for beauty in our world, and even film scores rarely present symphonic themes anymore in favor of quick, forgettable motifs. But La La Land proves me wrong. It shows us that we can have modern movies that still exhibit stunning cinematography, memorable musical themes, long, lingering shots filled with humanity, and a scope that feels grand without being about a superhero. It proves that movies can still capture that ethereal sense of timelessness found in so many films from the golden age of Hollywood. 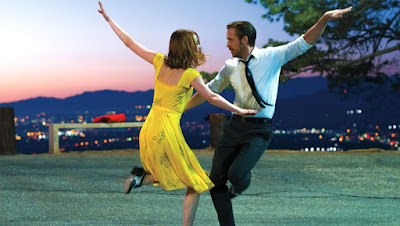 I love everything about La La Land: I love the acting, I love the themes, I love the fact that it's a throwback to a type of movie that I didn't think was possible to make in this day and age. As a fan of Los Angeles, I also love how much this movie loves L.A., or at least the myth of the city. As I get older, I am starting to discover that sometimes the myth of something is all we actually have. A quick aside: I've driven the entirety of Route 66, the most famous road in America, from the shores of Lake Michigan in Chicago to the Santa Monica pier in southern California, steps from the Pacific Ocean. The discovery of what Route 66 actually is (or rather, is not) helped open my eyes to the power of myth. In reality, it's just a road, but as a symbol, it's so much more. It's the path to redemption, to the dream of a better life. It represents freedom. That same trip found me walking the streets of Hollywood, dining on Sunset Boulevard, and watching the sun set behind the hills that served as the dwelling place of countless movie stars. And yet it's just a town, with rundown buildings, homelessness, and everyone hustling for a buck. Among the artifacts of old Hollywood stood gaudy souvenir shops, charlatans, and a sense of decay...but the myth endures. The point of all this is to say that reality is almost always different from the myth, but the myth itself is woven into our collective fabric and it's the myth that spurs us forward. We live for the myth.

La La Land is the tale of two people and their realities, but also of the myth. The director of the movie, Damien Chazelle, is clearly in love with the myth of Hollywood. The magic age that never actually was, Los Angeles as a haven, a muse, a paradise of purple sunsets and cinematic grandeur. In the commentary for the film, he mentions that Los Angeles is a city filled with a history that the people who live there are aware of, but don't care about at all. He equates it to modern Rome, filled with the artifacts of a once-mighty civilization, but uninteresting to the people who live there and see it every day. It's this absolute love of Los Angeles, of Hollywood, and the histories of those places, which seems to ooze out of every second of La La Land. 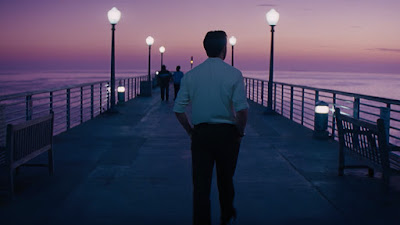 The music of La La Land is equally as inspiring and heartbreaking as the story of the film itself. Composed entirely by Chazelle's former college room-mate Justin Hurwitz, the score and songs embody that same jazzy, golden age feeling while retaining something edgy and modern. The film's major theme, "City of Stars," takes on new life as the film unfurls, eventually becoming something impossibly large, heartbreaking, inspiring, and tragically beautiful. It sums up Los Angeles perfectly: the hope, the beauty, the opportunity, and unfortunately the broken dreams as well. Yet La La Land is not a tragedy. It's the movie L.A. deserves, and it's a movie that Damien Chazelle and Justin Hurwitz spent years of their life working toward making a reality.

This is a little embarrassing to admit, but when I first hit play on this movie, I turned to my wife and said "Emma Stone is on Hollywood's A-list, but I don't understand why." I have always liked Emma Stone, from the first time I saw her in Superbad and all through the two Amazing Spider-Man movies where she played Gwen Stacy. But in relation to performers from previous generations, I perceived that something was lacking. Whatever was missing to me wasn't present in Birdman (another high profile Emma Stone performance), either. However, about 15 minutes into La La Land, I looked at my wife and said "I was wrong. Emma Stone is amazing." Just minutes into her first few scenes, I knew I was watching a performance that was special. Emma Stone won and Oscar for her work in this movie, and I'm so glad she did. A single movie can forever endear a performer to us, and this movie has cemented Emma Stone as one of the greats. 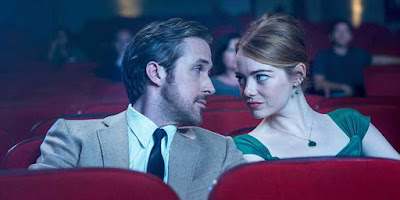 I'm writing about La La Land because I can't NOT write about it. It's been a long time since a movie captured me to this degree. It's a human story that also manages to be about myth, dreams, and the cost of achievement, all set against the fickle (yet beautiful) backdrop of Los Angeles. It's chock-full of things that modern Hollywood says aren't cool anymore--a lavish score, people singing on camera, the use of color to help tell the story, even long camera shots of human beings acting without the appearance of CGI (the film's dance piece overlooking Griffith Park was done without the aid of green screen). This movie has single-handedly restored my faith in a certain kind of movie. La La Land is beautiful, and it manages to make Los Angeles--and more importantly Hollywood itself--beautiful once again, as well.
Academy Award Damien Chazelle Emma Stone hollywood Justin Hurwitz La La Land Los Angeles musical Myth Oscar Route 66 Ryan Gosling