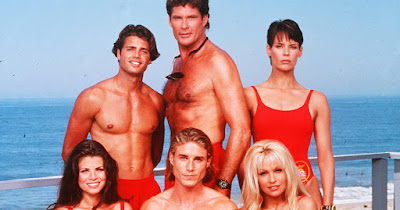 This is huge news for me. Believe it or not, I'm actually quite a fan of the show Baywatch. Reason number 1: David Hasselhoff, star of one of my all-time favorite shows, Knight Rider. Then there's the setting: every episode featured beautiful lifeguards placed against the backdrop of sun, sand, and the Pacific Ocean. I know Baywatch has been a punchline on Friends and I know that it deserves some of the jokes that have been thrown its way, but at the end of the day, Baywatch is not all that different from the American International Pictures "beach movies" that I love so much. No, it's not high art and it didn't have award winning scripts, but it was fun, and it ultimately had an uplifting message that I think we could use a little bit more of today. Plus, it featured quite a few stars, or actors that soon would be: Pamela Anderson, Carmen Electra, Nicole Eggert, Yasmine Bleeth, Mila Kunis, and some guy named Jason Momoa. The tone of the show is not entirely easy to replicate, as evidenced by my movie review of the 2017 feature film starring Dwayne "The Rock" Johnson and Zac Efron.

Baywatch has had some DVD releases, both domestically as well as internationally, but music rights issues have caused quite a few problems, and I don't believe there are currently any DVDs in the world that feature the original music and are also still available. Frankly, the DVD releases have been a mess, with episodes out of order and entire seasons being mislabeled. Add the fact that Baywatch has never been well-represented on streaming services and it adds up to quite an irony: the most watched show in the history of television (over a billion viewers worldwide) has become embarrassingly-obscure, with an entire generation having no idea what it is.

But that's all changing! Amazon Prime Video has just added the first nine seasons of the classic syndicated television show to their streaming platform in HD with over 350 pieces of new music that keeps the spirit of the original songs when the original licenses could not be obtained. The production company behind the restoration, Fremantlemedia, seems to really believe in the show and have not ruled out a new show if the demand is there. Hopefully more streaming services (and more seasons...Baywatch Nights, anyone?) will soon follow. And wouldn't it be incredible if we could finally get some decent DVDs or Blu-rays of the show? I need these HD episodes on my media shelf so that summer can last all year long! Here's hoping this is just the beginning. Now if you'll excuse me, I've got to go run in slow motion!