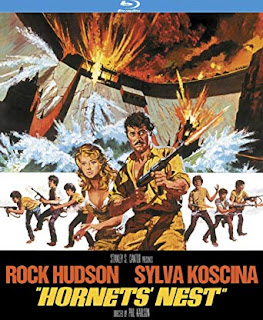 If you're looking for an unconventional World War II film, 1970's Hornet's Nest offers a powerful break from tradition.

The plot in brief: after a Nazi commander (Sergio Fantoni) commands his troops to lay waste to a small Italian village and slaughter most of the townspeople in the streets, the surviving children flee to the hills for safety. Meanwhile, a group of U.S. paratroopers attempt to infiltrate the area from above and are picked off one by one by Germans with machine guns before their feet even touch the ground. One paratrooper--played by Rock Hudson--survives, and he is rescued by the children of the village and hidden in a secret location until his injuries have healed. a German nurse, played by Sylvia Koscina (1958's Hercules), is also caught in this tangled web when the kids bring her to their hiding place in hopes that she can treat the wounded American soldier. These angry and frightened children nurse Rock Hudson back to health in hopes that he will help them take back their town from the Nazi occupiers. 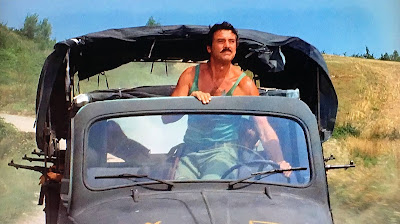 Hornet's Nest is crazy. The violence is not constant, but when it comes, it's big. Rock Hudson, perhaps best known as a romantic lead in the late fifties and early sixties, is an ancestor to John Rambo here. With his handlebar mustache, muscular frame, and olive fatigues, he's a million miles away from the movies he made with Doris Day a decade earlier. This comes from the second phase in the actor's career, when he'd experimented with more mature, violent work, and I can't praise Hudson enough for the performance he brings to this picture. He's joyless, humorless. He's the perfect killing machine. 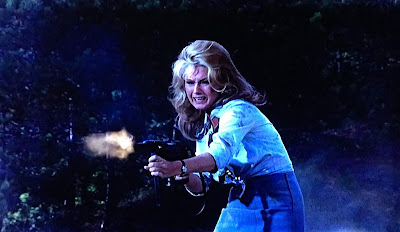 The wildest and most controversial aspect of this movie is the depiction of children killing their oppressors. These kids, which range from six or seven to around fourteen years old, arm themselves with machine guns, pistols, and explosives, and they use it all. There are about a hundred reasons this movie could never be made today, but the participation of these children in the violence is the most glaring. Rather than glorify the carnage in an exploitative fashion, though, the movie seems to understand that war is horrible and it claims victims in a variety of different ways. The kids have survived the slaughter in their village, but they've lost their innocence. There's even a scene where the lead kid, a teen named Aldo, attempts to rape Sylvia Koscina's character because she doesn't want to get involved in their campaign. As the kids hold her down, Aldo tells her that he's going to do to her what the Nazis did to their parents. Thankfully, the movie spares both Koscina and us the viewer from the act, with Hudson intervening, but the message is clear: war has more than one kind of casualty, and the scars it leaves behind run deep.  This is complicated stuff and, as much as we would like to pretend kids are protected in war, that's a fiction. 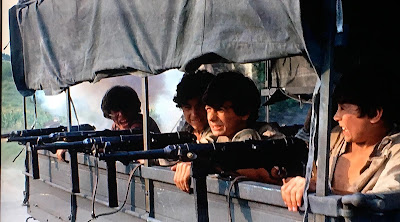 Lucky for us, Hornet's Nest is not just a war drama. It's also an action movie with lots of sneaking around, covert kills, and even a few scenes of all-out carnage. Sidebar: back in the nineties, Steven Spielberg revolutionized video games by bringing the acclaimed Medal of Honor series to the Playstation game console. With unprecedented attention to realism based on real World War II missions, Medal of Honor offered players the chance to carry out a variety of wartime operations, from sneak attacks and infiltration to all out melees. I bring this up to say that there are many scenes in Hornet's Nest that remind me of playing Medal of Honor some two decades ago. The feeling of realism is there, but so is a feeling of excitement at watching this one man and these kids face off against the Nazi hordes. This is not an army movie; this is one man behind enemy lines using every tool at his disposal, including vengeance-hungry children, to survive. Because the action is often used sparingly and effectively, it feels like the movie has earned the privilege of going nuts later on. 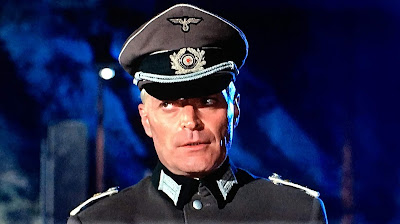 The icing on this cake is a cool score by Ennio Morricone, the Italian composer behind the music of The Good, The Bad, and The Ugly, aka the most recognizable spaghetti western score in movie history. Something I like about Morricone is that he often uses his music as a counterpoint to what we're seeing on screen. Specifically, he will use happy, bright music when horrible things are happening. He does that to a certain degree here as well, with a chorus of whistles that sounds like a camp song. These kids have unified together into a unit, but this is no camp. This is war, and they are the soldiers. Hornet's Nest is ably--if controversially--directed by Phil Karlson, the man behind the film noir staples 99 River Street and Kansas City Confidential, and he knows how to wring emotion and discomfort from certain scenes. He also knows how to pay those elements off in a satisfying way.
Hornet's Nest is an impressive film that is not entirely easy to watch. It tackles the real-life horrors of war, but it offers enough action and valor to make it palatable as escapist entertainment, especially given the tough guy turn from Rock Hudson, who is playing at a level that I didn't know he had. Sylvia Koscina is equally interesting to watch, bringing some sympathy to her role as a German nurse who is faced with a crisis of loyalty between her nation and her sworn oath to the preservation of life. The kids themselves are the real stars of this show, though; they do horrible things, but it never feels like they aren't real children. Imagine the Bad News Bears, but with machine guns. It's a powerful statement on what we are capable of when pushed to survive. Because of these controversial and gritty elements, Hornet's Nest didn't make a lot of fans when it hit theaters in 1970, and the movie seems to have spent the last few decades in obscurity. Thankfully, the film is now on Blu-ray via Kino Lorber Studio Classics, where we can judge for ourselves. I dig it, and I think fans of WWII movies that focus on the smaller, more personal stories will appreciate this the most.