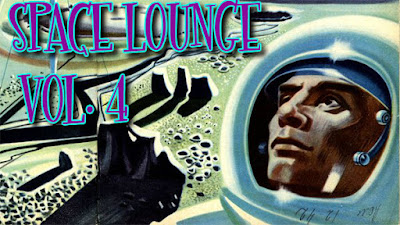 Howdy, cats and kittens, and welcome once again to The Space Lounge! This is your one stop shop for all the coolest in retro tunes that you simply cannot hear on the radio. Strap in, because the needle is about to drop and this party is about to rock!

1) "Detroit Swing City" by Alien Fashion Show
This fun cover of "Detroit Rock City" by KISS is from the swing revival of the mid-to-late nineties. Alien Fashion Show only had one major label album, which has sadly gone out of print but still surfaces from time to time.

2) "A Hard Day's Night" by Peggy Lee
An iconic singer and actress during the fifties and sixties, Peggy Lee will be best remembered by many as the sultry dog who sings "He's a Tramp" in the Disney classic Lady and the Tramp. However, to limit her to this is to do her a disservice. You only need to listen to her world-wise cover of "A Hard Day's Night" for the proof.

3) "Ghost Riders In the Sky" by The Ramrods
This song is one of the most covered tunes in rock and roll, a favorite of George Harrison, Johnny Cash, and even Willie Nelson. However, this 1961 version by the instrumental group The Ramrods embodies such a punk rock swagger that it will always be my favorite. It's loud, brash, and very raucous, especially when the chorus kicks in and the falsetto rises to a shriek. Perfect.

4) "D.W. Washburn" by The Monkees
This is one of my favorite tracks by The Monkees, a band that some discredited as being a copy of The Beatles (which is true) and therefore untalented in their own right (which is untrue). There's so much fun being had on this track, with its Dixieland jazz horns and honky-tonk piano, that it's impossible not to be sucked into the wild, free spirit of 1968.

5) "Kentucky Rain" by Elvis Presley
This Elvis track was released in 1970, coming during a white-hot period of Elvis' career. The King had largely walked away from acting and had recently re-committed himself to music. The '68 Comeback Special on NBC had reinvigorated his passion for performing, and the following years yielded some of his greatest musical achievements. "Kentucky Rain" is a little bit country, a little big rock and roll, but all fantastic. I've always loved how the chorus rises and falls, lulling the listener into a quiet place and then punching them in the gut. One of my favorites, and not one that gets a lot of recognition.

6) "Delia's Gone" by Johnny Cash
This track was re-worked late in Johnny Cash's career during his 1994 American Recordings, produced by Rick Rubin, but Cash originally released a much brighter, almost jaunty version of the song on his 1962 album The Sound of Johnny Cash. While I appreciate the stripped-down approach to this song about the murder of a lover, there's something anachronistic about the 1962 version that makes it the superior take for me.

7) "Get Back" by Little Big Horns
There's not much to say about this track other than I love how cheesy and fun it is. I love the flutes, I love the brass, I love the twangy guitar. This is such a departure from the original Beatles tune, but such a welcome diversion, as well. You can almost see swinging London.

8) "Memories of Madrid" by Herb Alpert and the Tijauna Brass

While Herb Alpert's musical output of the sixties stands as a sort of time capsule of syrupy melodies and is looked back upon as very safe pop, a lot of the songs still have significant power. This particular track is both beautiful to me and sad at the same time. I'm writing this as the final days of August dwindle away and another summer is coming to a close; "Memories of Madrid" captures the bittersweet emotions I feel. The long, warm days with loved ones are coming to an end. This song captures that combination of joy and sadness.

9) "Dancing in the Moonlight" by King Harvest
One of the quintessential easy listening tunes of the seventies, "Dancing in the Moonlight" is a little bit of A.M. radio gold from King Harvest, a band that, with their long hair, beards, and leather gear, looked like a motorcycle gang but made songs that were right at home coming  from the radio of a New York City cab at 2 o'clock in the morning. Grab one more cup of coffee for the drive.

10) "Manhattan Skyline" by David Shire
The soundtrack to the film Saturday Night Fever is the second-highest grossing soundtrack in history (behind The Bodyguard), selling over 40 million copies. And while The Bee Gees are most definitely the main appeal of the album with songs like "Stayin' Alive" and "Night Fever," there are other gems buried deeper in the track listings that aren't quite as celebrated. My favorite is "Manhattan Skyline," which sums up the music of 1977 perfectly. Disco beat, big brass, and a very seventies synthesizer that has such a unique, wonderful sound.

And with that, this journey through space and time has come to an end. Remember to tip your waitress and drive safely. Until we meet again, my friends, be groovy.