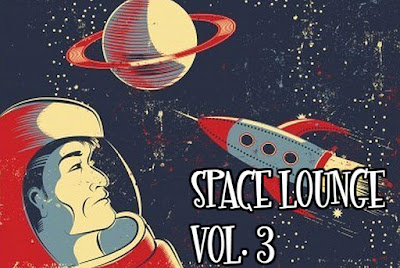 Welcome to the Space Lounge: Volume 3! This edition contains the longest, most eclectic mix of music yet! Featuring Dusty Springfield, The Lovin' Spoonful, and King Louie himself, this is a blast backwards in time to the days of coolsville! Pour something smooth, loosen your tie, and get ready to dance in your socks to this curated playlist of incredible music from the fifties, the sixties, and the seventies as we rocket into orbit!

1) "Spooky" by Dusty Springfield
I think most people from my generation know Dusty Springfield for her song "Son of a Preacher Man" as seen in Quentin Tarantino's Pulp Fiction. Dusty was an incredible artist with some of the smoothest and most soulful music of her day, and this rare B-side cover version of Classics IV's hit might even be better than the original.

2) "Soulful Strut" by Young-Holt Unlimited
This is one of the most quintessential tunes of the late sixties, combining multiple styles and genres to become something that captures the era perfectly.

3) "It's a Shame" by The Spinners
This soul gem from 1970 was co-written by Stevie Wonder for Motown's sub-label V.I.P. Records and became a hallmark of The Spinners and the "Motown Sound."

4) "Baby Come Back" by Player
Jumping forward to 1977, this mellow bit of AM gold is a soft rock masterpiece. I've always loved the spacey sound of the keyboards and the otherworldly guitars. Even the drums have a soothing quality to them. The whole song is an earworm that wraps itself around your brain and doesn't let go. I bet Peter Quill has this on his Zune.

5) "Ride Captain Ride" by Blues Image
Here's another one that I suspect we could one day see in a Guardians of the Galaxy movie. There's a Grand Funk Railroad version of this song, but I think the original Blues Image composition is still the best.

6) "Six Man Band" by The Association
The Association is a band I've absolutely fallen in love with lately, combining heavenly harmonies with a psychedelic San Francisco sound. This is one of their heavier tunes. Big props for writing the line "On a fast flying-trip, dirty laundry in my grip, mostly drip dry." A lot of rock purists resent The Association being lumped in with acts like Hendrix and The Doors, but I think they were innovators, as well as a vital element of the counter-culture movement.

7) "Lonely" By The Lovin' Spoonful
This song was written by Lovin-Spoonful-member John Sebastian for Francis Ford Coppola's 1966 movie You're a Big Boy Now, and was performed by the Spoonful themselves. While that movie is interesting (if forgettable), this song transcends it entirely, which is really something, considering the talent of the man who directed The Godfather films. In the movie,"Lonely" plays while our main character is wandering the seedy side of New York City, looking at posters for live nude girls and magazines of disrobed women. It works well in that context (hence the title "Lonely"), but I see this as a lost theme for a spaghetti western that was never made. As you listen to it, I want you to think of a dusty trail rider with a week's worth of beard on his face as he makes his way through a town that doesn't want him there. he rides through on a tired horse, trying to make eye contact with the people on the streets, but they only fix their gaze at the ground. Finally, steering his steed into the setting sun, he rides away in solitude and the people of the town are left to wonder who he was and where he came from. Either way, he's gone, and he's not coming back. A drifter, looking for refuge, but finding none. That's what I see when I hear this song. Maybe you'll see it too.

8) "The Girl From Rio" By Daniel White
This is the title song of a 1969 international espionage flick of the same name which was the sequel to a 1967 film called The Million Eyes of Su-Muru. Both movies feature a woman who intends to take over the world with an army of women in a very Bond-film like fashion. The Girl From Rio was directed by controversial filmmaker Jess Franco and there's definitely a more taboo feeling to the sequel than the original. Mid-to-late sixties movies like this were a huge inspiration on the Austin Powers films and are impossible to take seriously now, if one ever could. A lot of the elements don't really work in today's context, but some of them hold up really well in spite of all the years and mileage. One such element is this song, which spiritually takes us to the sandy beaches of Brazil with a gentle samba that is both sad and exotic.

9) "Endless Sleep" by Jody Reynolds
Listen to this song from 1958, the first generation of rock and roll, and tell me that you don't hear a huge inspiration on Jim Morrison and The Doors. Yes, there's an undeniable rockabilly quality, but there's also a moody, creepy, slinky vibe thanks to the delayed guitar and the hypnotic tambourine. That's all very appropriate, given the song is about saving a woman from drowning in a sea that wanted to claim her as its own.

10) "Just a Gigolo/I Ain't Got Nobody" by Louis Prima
Just in case you don't know, Louis Prima portrayed King Louie in the 1967 Disney classic The Jungle Book, and I don't think you can find a wilder character in real life among the swing kings. His reputation as a party animal is legend, and if you listen to this wild and swinging track from 1956 (!!!), you'll understand why. This thing starts gently and builds into something absolutely CRAZY. It's a scientific fact that it's impossible to listen to this song and keep your body completely still. Heaven forbid you listen to this in the car. David Lee Roth covered this one in the eighties (it's was a great MTV music video staple) but it can't touch this version in terms of power and charisma. I've wanted to end a Space Lounge with this one since I first came up with the idea because it's the living embodiment of the spirit of COOL that was everywhere in the fifties but that we've somehow lost. Parents were worried about rock and roll corrupting the youth in the fifties, but was no one worried about THIS? It's the audio equivalent of a party that goes to 4 a.m. and ends when the cops come to shut it down. Listening to this song helps remind me not to take life so seriously. It also reminds me that Louis Prima really was THE KING.

*I have not uploaded any of these videos. All credit and responsibility goes to the original YouTube uploaders for these videos*
50s 60s 70s Blues Image Dusty Springfield exotica Guardians of the Galaxy Jody Reynolds Louis Prima Lounge Peter Quill Player Samba space lounge The Association The Lovin' Spoonful The Spinners