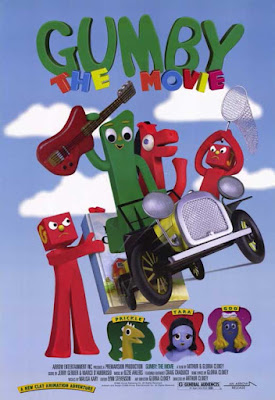 From the "huh?" files comes Gumby: The Movie, aka The Gumby Movie, aka Gumby 1.  Until I saw the Blu-ray/DVD combo pack while out shopping last week, this wasn't even on my radar. Boy, I'm glad I found it.

As it turns out, this flick had a very short theatrical release at the end of 1995 (very short, and only in 21 theaters nation-wide), but I swear I'd never heard of it until just a few days ago. Maybe it was just so far outside my focus back then that it didn't even register. I've always known who and what Gumby was, but I can't really ever remember watching it besides flipping through the channels in the early days of cable. Regardless, here we are today, and I'm the proud owner of this movie on Blu-ray in an awesome package that looks like this: 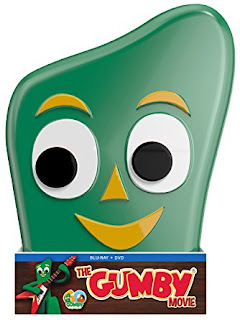 More important than owning this cool package, I've also watched the movie. It's fun, and it's not at all what I was expecting. In the past few days, I've gone down this rabbit hole of Gumby stuff that's spurred a crash course education in the green guy's creator, Art Clokey and his other, maybe even weirder, creation--Davey and Goliath, the morality-based clay animation series sponsored by the Lutheran church. Turns out Clokey was a pretty cool guy. While I'm sure some people would like to pin him down as a Christian-based entertainer (and believe me, I have no problem with that), the reality seems to be that he was more complicated. His work seems to exist at the crossroads of art, literature, and family values, but with a healthy dose of Salvador Dali thrown in. See, while there are morals to be found in his work, one doesn't arrive at them in the way you'd expect. Clokey seems to have one foot planted in the psychedelic and another in the surreal, but there doesn't appear to be anything mean-spirited beneath the surface. 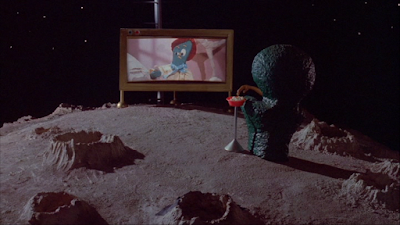 Let's consider the plot of The Gumby Movie. An evil finance company is selling mortgages to farmers in Gumbasia (the place where Gumby and his pals live) at 25 percent interest, causing little old ladies to literally faint in exasperation when they discover that they'll never be able to afford their homes and are going to lose everything. Meanwhile, Gumby has a sweet rock band called The Clayboys, and their music is so powerful that it moves his dog, Lowbelly, the tears. Only his tears are actually pearls. And pearls are worth a lot of money, see? Meanwhile, The Blockheads (the villains of the Gumby universe) see an opportunity for capitalism and kidnap the dog, replacing it with a robot. Soon, all of the Clayboys have been kidnapped and replaced with robot versions of themselves, all in an attempt to get rich. So the real Gumby, along with his friends, sets out to defeat The Blockheads, rescue Lowbelly, and save the farms of Gumbasia from the wicked finance company. Along the way, there are musical numbers, a trip into space, and adventures in the worlds of books. 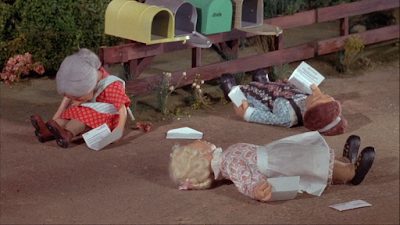 The thing that I admire about this movie is the sheer creativity. These days, we live in an era of corporate film making in which business executives sit around a table and dictate how things are going to be done. Even in the mid-nineties--which was a generation ago--there was a level of homogeneity in a lot of our films. None of that is present in The Gumby Movie. It was made by Art Clokey, his wife Gloria, and a team of people that the Clokeys assembled by hand, including a few family members. The production staff is small, and that gives this entire film a very hands-on (no pun intended, given the clay nature of this project) feel. None of this stuff would fly in a studio movie. The suits would say things like "this doesn't make sense" and "your narrative has no structure." And they'd be right. 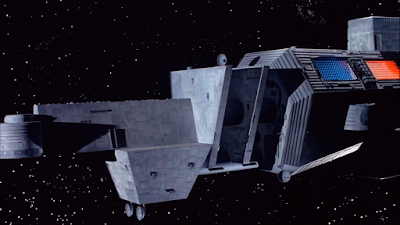 But the thing that makes this movie so special is that it is unlike anything else. I'll admit, it occasionally drags, and sometimes it goes just a bit too far out to retain my interest. Maybe we spend too much time on the farm just hanging out, or it takes too long to get the band out of the clutches of The Blockheads. It's rough around the edges in the ways that only handmade things are. This is like the Etsy equivalent of film making, and I dig it so hard. For all the times when I wish this movie would get on with the show, there are things that I absolutely love about it. I'm nuts about the fact that we can go from a farm to Arthur's Round Table to a space battle with lightsabers in the span of just minutes and it all makes as much sense as is necessary. 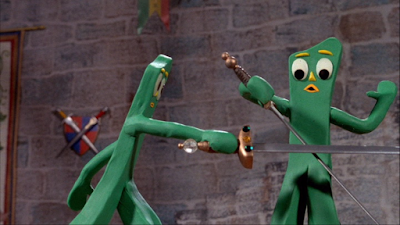 Here's what I really love about this movie, though: on the surface, this would seem to be a children's film, maybe even a preschool film, but the subtext to this universe is like an iceberg that seems small but actually goes hundreds of feet beneath the water. Clokey's universe is made up of literary references both obvious and obscure and inspired by everything from big budget blockbusters to the great thinkers. In that sense, his work reminds me of the efforts of Jim Henson. Kids will take one thing away, but adults with sharp eyes will draw far more. For instance, two of his characters, Prickle and Goo, are named after the research of the philosopher Alan Watts, who declared that there are two types of personalities: the prickly, and the gooey. Smart stuff, if you're able to catch it. 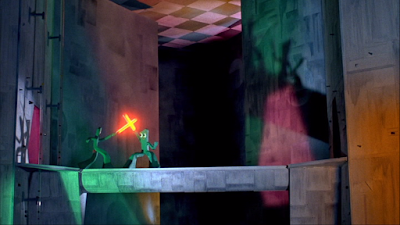 It also bears mentioning that The Gumby Movie was Art Clokey's final word on the character and the culmination of forty years of work. Through all the various series over the decades, Clokey was always the chief creative force behind every decision, and the Gumby from fifties has the same spirit as the Gumby from 1995. All things considered, that's pretty cool. What really impresses me is that The Gumby Movie has wide age range appeal, offering things to everyone from three to eighty-three, without pandering or talking down to anyone. Take Gumby for what he is--a green kid who lives in a world populated by both clay dolls and human beings--and I don't see how you could help but have fun. The craziest part is that all this psychedelic animation and surrealist storytelling is done without even the faintest hint of cynicism. Yeah, this is a movie about high mortgage rates and capitalist raiders, but that somehow sits perfectly next to robot waiters that spill milkshakes and scientists that sound like Ed Wynn. Art Clokey's mind is a fascinating place, and I feel glad to have been invited to explore it. 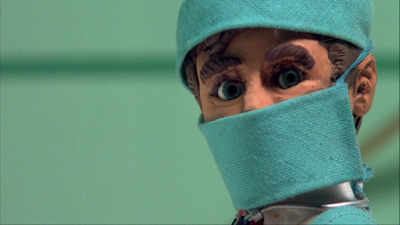 So like I mentioned, I've now gone down this weird Gumby rabbit hole. As it turns out, all the United States distribution rights for the various Gumby properties currently reside with a company called NCircle Entertainment. They're the cats who have put out the movie in the sweet packaging, and they've also released the complete 1950s series in one volume as well as the 1960s series in two seperate volumes. Full disclosure: it appears that five Gumby shorts have been cut from those releases due to Native American stereotypes, making those sets incomplete. NCircle also possess the rights to the 1980s revival series, but those discs have not been announced as of yet. The first pressings of all these DVD sets came with figurines of the various characters, and were extremely inexpensive (I picked up all three volumes for around 25 dollars). There's also a complete collection from Australia's JB Hifi that purports to contain everything except this movie, I believe, but that will require a region-free DVD player for US viewers. Even though I've picked up all the NCircle Entertainment releases, I'm tempted to spring for the Australian release for the "banned" shorts and the eighties episodes that haven't been released yet in America. 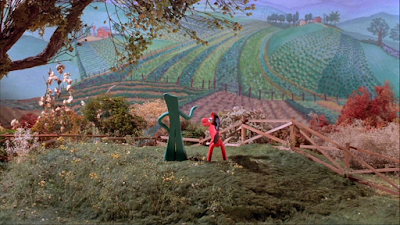 I've got my work cut out for me, but I'm really excited about diving deep into this wonderful world of Art Clokey's imagination. Though it seems simple, these waters run deep, and there's no better example of that than The Gumby Movie. At times funny, sweet, and exciting, but mostly just very surreal and unexpected, this movie has taken me completely by surprise. I'm really glad to have discovered Clokey's world when I can appreciate it the most.