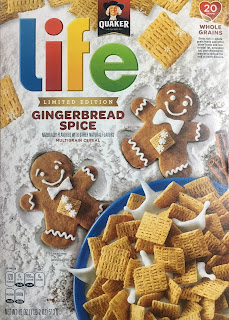 The holidays may have come and gone, but I only just found this in stores. I was in a Target that I don't normally frequent, and I stumbled across an end-cap display with a few boxes of Quaker's Life Cereal in the "Limited Edition" flavor of Gingerbread Spice. The best part is that the box was on clearance for $2.11. So what if Christmas is over?! It's still a winter wonderland outside as I write this, and the idea of some tasty gingerbread in my breakfast bowl sounds amazing! I threw the box into my shopping cart and had a bowl mere minutes after I got back home.

So what's the verdict on this seasonal cereal flavor?


Eh...it's okay. It's been a few years since I've had Life cereal, so I had forgotten how the little crispy squares get soggy almost immediately. I'm not even joking; as soon as milk touches this stuff, it turns into a squishy mush. I'm not complaining about it because I kind of like it squishy. Fun fact: there are some cereals (usually flake-based ones) that I will let sit for a while specifically to get soft. On that level, this is satisfying for me because the first few bites are still a little firm, but I can let the last few spoon-fulls slide down my throat like I'm a baby bird.

The real thing that throws me off here is the taste. I notice the distinction between "Gingerbread" and "Gingerbread Spice" in the name, and I think the addition of "spice" gives The Quaker Oats Company a lot of liberty with what exactly that flavor is. So here's the thing: I'm not sure this cereal actually tastes anything like gingerbread, but I'm also not sure it DOESN'T taste like gingerbread. It's weird. it does most certainly taste "festive" if that could be a flavor, but I don't really detect any ginger. Lots of SOMETHING going on here, but none of that tangy, biting ginger flavor that makes gingerbread so distinct. 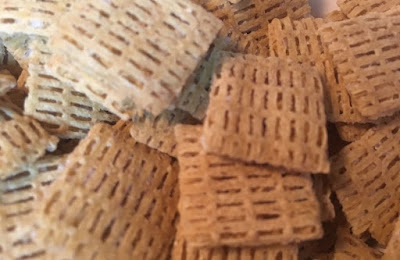 It get's even stranger. Yes, each bite tastes very much like something that should be eaten during the holidays, but there's also an aftertaste that I can only describe as savory. A savory cereal?! This is going to sound ridiculous, but the aftertaste of Gingerbread Spice Life reminds me of gravy. I realize taste is subjective and you might have tried this cereal and think I'm crazy for suggesting that this cereal has gravy notes, but that's the only thing I can readily think of to compare the unique flavor to. It's definitely an artificial flavor, so maybe that's why I'm having a hard time pinpointing it. I'm not used to that taste when I eat cereal.

Now I realize that nobody is eating this kind of cereal because it's healthy, but isn't one of Life cereal's selling points is that it's a good option for choosy parents? Taking a look at the label reveals that there is no actual ginger, nutmeg, or spice in this cereal. Maybe those things are hiding under "natural flavor," but I kind of doubt it. I mean, come on, Quaker, the least you could do is sprinkle some ground ginger powder and some nutmeg in this stuff. Also, I see there's not one but TWO yellow food colors added to the cereal. This seems weird to me for a cereal that is essentially the color of straw, but maybe that had to add yellow to cover up the brown of the gravy. 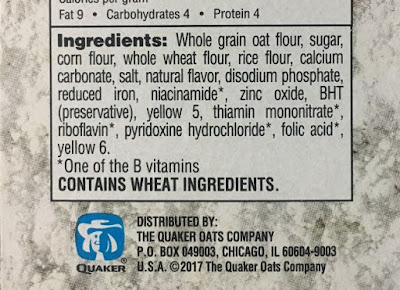 So we have a cereal that gets soggy quickly, tastes like gravy, and doesn't really have any noticeable ginger flavor. Yet it's somehow completely inoffensive and totally edible. But being inoffensively-edible and being good are two different things. I've had two bowls, and I think I'm done with it. In the crowded cereal aisle, there's always a new flavor, a young gun waiting to take the place of an old favorite past its prime. I can't help but wonder if that's what's happened to Quaker's Life cereal: once a famous contender that both parents and children could agree on, but now a fading relic that has to resort to gimmicks. Quaker still rules when it comes to oats and fighting diabeetus, but I can't say the same for this cereal offering. Let's see if Mikey likes this stuff, because I don't think it's for me.