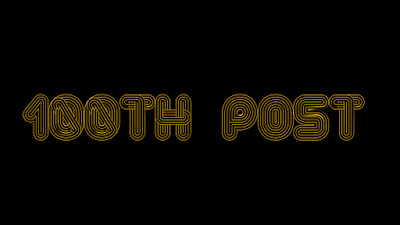 Happy Thanksgiving to all! This year brings special cause for me to celebrate and be thankful, because this is the 100TH POST on this site. That wouldn't mean a thing without YOU.


I started Cereal At Midnight in February of 2017, and I quickly discovered that it's tough creating something new in our modern culture. In fact, it's a lot tougher than it was a decade ago, and probably tougher than just a year or two ago. The last thing that the internet needs is another voice to add to the noise, and carving out a niche for new content and new opinions can be difficult. It's an unfortunate fact that a staggering amount of YouTube channels go dormant very quickly with the creators losing interest. The vast majority of podcasts never make it past their twelfth episode before fatigue and discouragement sets in on the creators. I can verify that trying to get eyes and ears on your content is harder than it has ever been, and it's easy to feel like you're invisible. There have been times I've considered scrapping the whole Cereal At Midnight experiment and just enjoying all this cool stuff behind closed doors.

But here we are, 9 months later, with 100 posts on this site and 28 videos on YouTube that didn't exist last Thanksgiving. YOU came to Cereal At Midnight. YOU read the posts. YOU watch the videos. I am unbelievably thankful and grateful to YOU. Thank you so much for being a part of this.


So where do we go from here?

I have plans for Cereal At Midnight. I've leaned heavily on movies, TV shows, and music in establishing this website as a brand because those are the things that I know best and that I've spend the most energy on, but I want C@M to be about a lot more than that. The idea is to celebrate EVERYTHING that is unique and interesting. The world is a fascinating place populated by interesting people. This site, the blog posts, and the videos are constantly evolving; I'm not sure where exactly we're going from here, but I know it's gonna be a blast.

With our spoons held high and hours left until the sun rises, let's see what's out there.
100 100th Cereal At Midnight thanks Thanksgiving YouTube