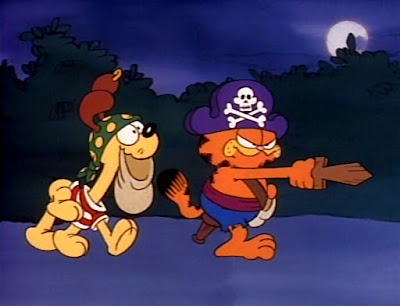 If you're a child of the 1980s, you probably have fond memories of this Halloween special that originally aired October 30th, 1985 on CBS. The half-hour show was a staple of my annual Halloween viewing habits for years, and I vividly remember this being the topic of conversation during school the day after it debuted. What I appreciated about it then is what I still appreciate about it now: it tried to be scary, and it was. So often with kid's fare, the creators pull their punches at the last minute, but Garfield's Halloween Adventure doesn't really let the viewer off the hook. The ghosts of long dead pirates are real.

I was a big fan of Garfield in the 1980s (as was most everyone else). There are at least nine different Garfield primetime specials that aired during the decade, and his holiday specials (representing Halloween, Thanksgiving, and Christmas) were annual viewing in my house long after I was technically too old to watch them. Here's a confession: not a single holiday season goes by where I don't still watch the Garfield holiday specials. I have the DVD, which went out of print for several years but is thankfully available once again, and I spin it every year just like I do with the Charlie Brown specials. This is probably because every single year around this time during the latter half of the 1980s and into the 1990s, CBS would pair It's the Great Pumpkin, Charlie Brown with Garfield's Halloween Adventure during prime time, and it was appointment television for any kid. Garfield--as voiced by Lorenzo Music--has retained the appeal he held for me all those years ago. And let's not forget that fantastic song from soul legend Lou Rawls.

I'm not the only one who holds this TV show in high esteem. First of all, it won a Primetime Emmy in 1986 for "Outstanding Animated Program," the THIRD Emmy for a Garfield TV special. Second, there's an entire generation of pop culture fans who regard this special to be as timeless (or nearly) as It's the Great Pumpkin, Charlie Brown. These fans all cite the same things I have: it's fun, captures the spirit of Halloween perfectly, and is legitimately scary--at least to a kid in 1985. 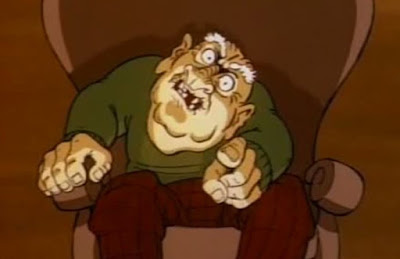 This special is on YouTube because everything is on YouTube. but if this is something you're into, show your support by picking up the actual DVD. I don't make anything off the links I put here, but I think it's important to support the official releases of things that we love and appreciate so that the creators are compensated. Here's a link to Amazon for the DVD that features all three holiday specials. As I write this, the disc is only $4.99.


Sixty men all lost at sea, all of 'em drunk except for me.
'Twas I who had to face the storm, with nothin' in sight to keep my warm.
Yo, ho, ho, ho! Over the raging sea we go!
Yo, ho, ho, ho! Wherever the four winds blow! Hey!