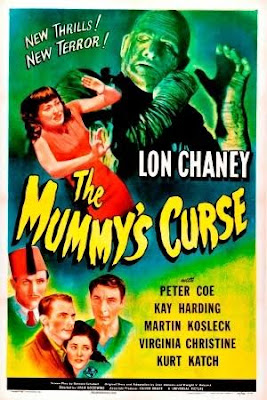 The original cycle of Mummy movies ends not with a roar, but with a whimper.

When I discussed The Mummy's Ghost, the movie that precedes this one, I mentioned that there's very little to justify its existence. I concluded that there were too few new ideas to really make the production necessary, and everything felt a little too much like reheated leftovers. Well, that was before The Mummy's Curse, the follow-up film that debuted theatrically in December of 1944, just a few short months after the previous film. THIS is a movie that really serves almost no purpose.

Everything about The Mummy's Curse feels like a rehash. By now you know the drill. Tana leaves, immortal curse, reincarnated Egyptian princess, blah blah blah. There's the expected recycled footage, now long past its freshness date, and the same business with high priests and the will of the order of something or other. Frankly, a lot of The Mummy's Curse is just plain boring, which is a real shame. We are now light years from the dangerous, sexy, moody masterpiece that was 1932's The Mummy. Truthfully, by this point in the life of the series, the censors had pretty much neutered Kharis and any real sense of danger that he posed. It's ironic that the movies from the 1930s were so much more powerful and ballsy than the stuff that came during and after World War II, when humanity had actually faced evil head-on.

Things kick off with, of all things, a musical number. When you think of the Mummy, don't you just think of a rousing bar song? Furthermore, this takes place a full 25 years after the previous movie! With all the years each movie puts between itself and the former films, sometimes it feels like they should be taking place alongside the adventures of Captain Kirk and Mr. Spock in the 23rd century. Rounding out a trifecta of strange decisions, we find that this film is inexplicably set in the bayous of Louisiana instead of Mapleton (which is in Massachusetts), where we've been for the last two movies and where Kharis last met his defeat. The Cajun vibe actually does a little bit to distinguish this movie from the others, so I can't complain too much. Chance Boudreaux from Hard Target would fit right in here. It seems there's an irrigation project underway in the swamp land, and I'll give you three guesses as to what they uncover. 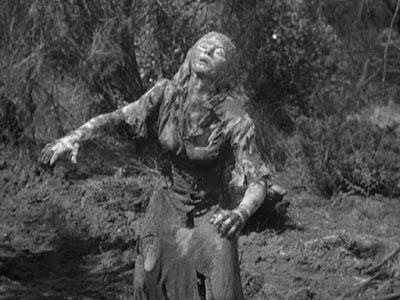 This movie does give us something that we wouldn't really get for decades, and that's a she-mummy. Unfortunately, any mileage that they could have gained with switching things up is quickly lost by doing almost nothing with the idea. In the previous movie, Kharis actually succeeded at getting the girl that he believed was the reincarnated Princess Ananka. Well, this movie seems to walk backwards and makes that story development almost useless, because the mummy of Princess Ananka in this movie is somehow not quite a mummy. Makes no sense, does it? She washes off and she's all young and pretty and can think rationally, despite having been DEAD...well, un-dead. And this former she-mummy is afraid of Kharis, naturally, so we still fall back on Kharis chasing the woman he thinks is his princess. It's all so ridiculous. It's all so pointless. It makes my head hurt to try to figure out how we're somehow back here after everything that's happened.

In the role of Ananka is Virginia Christie, from Guess Who's Coming to Dinner and the outstanding noir film The Killers. But why didn't Ramsay Ames return to reprise her role from the previous movie as the girl for Kharis to pursue? It had only been a matter of months in real-time. This decision, and so many more, boggle my mind. I don't even feel like listing the main players in the cast because it almost seems like there's no point. Even for a B-film, there's no real star power here, aside from Virginia Christie and Lon Chaney, Jr, who makes his final appearance as Kharis here.

The Mummy's Curse isn't a BAD movie in the sense that some movies are legitimately awful. It's moderately watchable, and is helped by a short running time. It's just kind of a shame that there isn't more originality on display, because there's very little incentive to watch this movie unless you're a fan of the series, which I am. But even then, no one is arguing over the quality of this movie. Not for the first time, I'm wondering if watching these movies one after the other is one of the reasons that their flaws are made all the more apparent. If I were a movie goer in late 1944 or early 1945, and if I had enjoyed the previous Mummy movies whenever they came to my local theater, would I feel compelled to go see The Mummy's Curse? I probably would have, because I'm a fan, but I think I would have been disappointed when it was over. Then again, maybe not. It was part of a double bill with the Basil Rathbone Sherlock Holmes movie The House of Fear, and I'm also crazy about that series of films. 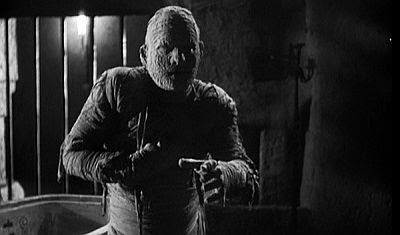 Still, it's hard not to notice that this is a franchise that has seem much better days. The first three films in the series are all unique and moderately original. Even when made for a tight budget, they still have ideas that transcend their limitations. This is the kind of thing that Roger Corman taught us: a lack of money doesn't equal a lack of ideas. The last two films in this series suffer from exactly that--a lack of ideas--and leave the series in such a poor state that the only place to go from here is comedy. This is why it was such a big deal when Hammer Film Productions took what made the original The Mummy from 1932 work so well and remade it for a 1950s audience, with all the thrills and chills dialed up. Unfortunately, we won't be discussing those, because they aren't technically Universal Mummy movies. They'll have to wait...for now.

This franchise needs an enema, and it looks like it's going to get one. Next time, we will discuss Abbott and Costello Meet The Mummy. See you then.