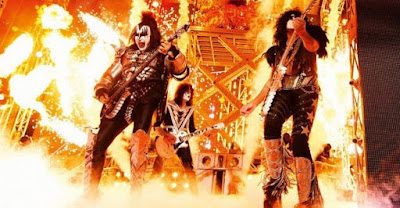 You wanted the best, you got the best.

In November of 2014, KISS took up a nine-show residency at the Las Vegas Hard Rock Hotel and Casino in celebration of the band's 40th year. Almost two years later, in August of 2016, the band released <i>KISS Rocks Vegas</i>, a visual and aural record of those nine shows. In typical KISS fashion, the band have covered all their bases to appeal to collectors on all levels: there's a DVD/CD combo pack, a Blu-Ray/CD combo pack, a DVD/2-LP combo pack, and for the REAL high rollers, a "deluxe edition" with the Blu-ray, the DVD, and two CDs. I sprung for the Blu-ray/CD version because I wanted to see the show in high definition, but wasn't ready to drop a Benjamin on the deluxe version.

Show how is the show? In a word, awesome. It's an amazing thing, when you really think about it. Like Alice Cooper before them, KISS has been performing basically the exact same spectacle for over forty years. The songs change from tour to tour (sometimes), but you can always count on the same high spots: there will be loads of pyro, a rising stage, Gene will spit blood and breathe fire, and "Rock and Roll All Nite" will close the show as confetti pours down from the heavens. If you go back and watch some of their concerts on the "KISSOLOGY" DVD sets (and you should), you see that they still do a lot of the same choreography that they did in 1976. "Black Diamond" is 90% the same as it was forty years ago. 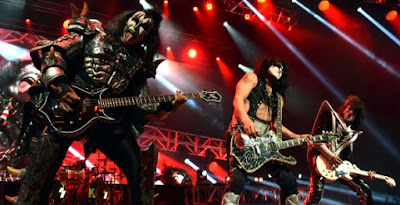 AND YET this show never gets old or feels stale! I think a big part of why is that the members of KISS are outstanding musicians and that they are born entertainers with an ageless appeal. They've been around for three generations now, and the kids who saw these guys in the seventies now have kids themselves-- some even have grandchildren--and that's represented here as there appear to be quite a few kids in the crowd, many of them in face paint. And those kids want to rock just like their parents and grandparents did. KISS has really stumbled onto something and embraced their status as a legacy act that knows exactly what their fans want. It's probably one of the keys to their longevity. Another key would be the massive amount of hard work they put in.

I've always thought that guitarist Tommy Thayer and drummer Eric Singer are a great fit and excellent players in their own right. It's a shame that some people still criticize that Gene and Paul went on without Ace and Peter; Thayer and Singer will ALWAYS be in the shadow of their predecessors. The real shame is that they're forced to wear the Spaceman and Cat gimmicks, even though they have no connection to those characters. I can't even really get mad about that, though, because KISS is a brand as much as anything else. How may casual fans will know that Tommy and Eric aren't original members of the band? How many will care?

On to the show itself: the setlist offers a good cross-section of their career with as much love being shown to their underappreciated eighties makeup-free years ("Lick It Up," "Tears Are Falling") as their seventies heyday. They even play "Psycho Circus," which is one of my all-time favorites, and "Hell or Hallelujah" off of 2012's <i>Monster</i>. Of course, all the classics--I'm sorry, Klassics--that we expect are here, from "Love Gun" to "Shout It Out Loud." There are even a few deep cuts as a surprise for hardcore fans.

The concert footage, no doubt culled from hours of performances over the nine shows, is really great, and probably closely recreates the experience itself as much as possible. There are crowd shots, but they're not excessive, and there's a lot of camera angles, but it's usually not distracting. I will say that the video during the very first song is WAY too choppy with two cuts PER SECOND when the band first comes on, but it tones down quickly. Thank the rock gods, because it would have been impossible to watch at that pace. I guess the producers wanted to mimic the excitement and the spectacle of a KISS show by giving us a seizure. No doubt they sell KISS-branded spoons to hold our tongues down.

If there's a downside to a 2016 high-definition video presentation of a band led by two dudes in their sixties, it's that the HD cameras are not always flattering to their subjects. Paul Stanley is in amazing shape--much better than me--but it does something to ruin the illusion when I can see his belly jiggling behind his guitar (even though his belly is way flatter than mine). Also, I've never realized that Gene Simmons is drooling constantly, with gobs of spit stretching down his chin and onto his guitar from all the tongue shenanigans. Kinda gross. These are not things you would ever notice if you went to a live show, so it's kind of a shame that we get to see the cracks in the makeup, so to speak. All these little quibbles and observations aside, the show itself is just incredible. FACT: KISS sounds better and tighter now than most of their peers did thirty and forty years ago, and they still look like they're having fun.

There's a neat little acoustic set (you can tell I'm over thirty because I just said "neat") as a bonus feature on the menu that has the band at what appears to be a VERY limited engagement playing a handful of their best acoustic hits in an area the size of my living room. As with the main concert itself, these guys still sound great; even if they can't quite hit the high notes on "Goin' Blind" anymore, they sure do try. As Wayne Gretzky famously said, you miss 100% of the high-C-notes you don't sing. This is a band that's still going for it. There's also what I perceive to be a dig at Peter Criss buried in Paul Stanley's introduction to "Beth," but maybe it wasn't intended to be? Eh, I think it was. 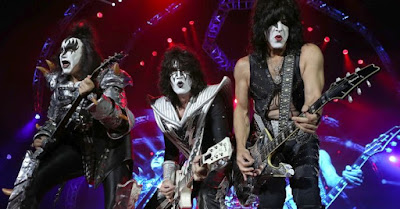 The package itself looks great. you get the CD and the Blu-ray in a cool little fold out case that includes a 16-page-booklet full of photos. I like booklets. I wish other Blu-rays came with booklets. Also, the booklet smells great, if you're into that sort of thing. Remember the way cassettes used to smell when you'd open them? OMG. I digress.

I'm super-stoked to add this little combo pack to my KISS collection--sorry--Kollection, This band has always known how to put on a great show and how to give fans exactly what they want, and they really deliver with this live album and video package. Frankly, it's good just to have something new from the band, since there hadn't been any new music since 2012 and there hadn't been a live project since 2006. What they've delivered is evidence of a band still thriving in their fifth decade and STILL worth a deuce.
Ace Frehley Eric Singer Gene Simmons Hard Rock KISS Las Vegas Paul Stanley Peter Criss Tommy Thayer