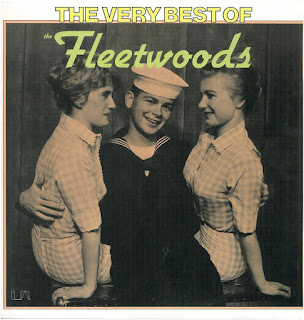 Here's a shout out to The Fleetwoods, a vocal trio of teenagers who, in spite of being clean-cut all-Americans not long out of high school, managed to birth a musical masterpiece with "Mr. Blue," a song favored by everyone from Bob Dylan to Garth Brooks.

During the late 1950's, rock and roll nearly died: Buddy Holly, The Big Bopper, and Ritchie Valens were killed in a plane crash. Elvis was drafted into military service. The band that would become The Beatles hadn't even arrived in Hamburg. Amidst this gap came a bevy of "safe" musical acts, not the least of which was The Fleetwoods. Over nearly seven years, these three singers hung in the charts with their harmonies and soft stylings, contributing sailor hats to popular fashion and a couple of lasting hits along the way such as "Come Softly To Me" and this, what I consider to be their greatest achievement. This is two-and-a-half minutes of 1950's perfection.