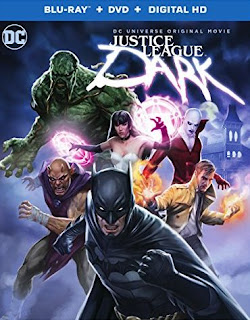 Why does the title of this movie make me crave chocolate?

Warner Brothers has brought us a new installment in their never-ending line of direct-to-video (as in DVD, Blu-ray, and Streaming) animated superhero films. Following on the heels of 2016's divisive and standalone adaptation of The Killing Joke, the new film returns us to the universe of DC's New 52 comic book landscape in which all the heroes are younger, less experienced, and look different from the icons that a lot of us grew up with.

I've not been the biggest fan of the New 52 and am kind of glad that the whole thing is over and that DC has moved on to Rebirth, incorporating the established personalities of some of their biggest heroes as they've existed for decades. It's still a far cry from embracing their 75+ year continuity and legacy, but it's a start. Justice League Dark, however, works because it's not really about any of the main DC heroes and instead focuses on a core group of supernatural characters that work outside the  mainstream. Batman is here, but he seems to serve as our gateway to these lesser (and that is not an insult) heroes that appear here. I get the impression that he was inserted to draw attention to what would otherwise fly too far beneath the radar. 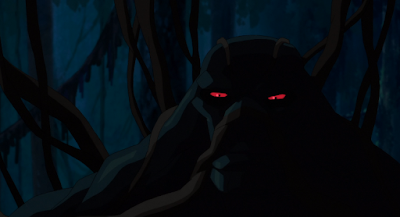 Maybe that's why this movie works as well as it does. Expectations are lower because this isn't a story with the highest stakes or characters that most of us have loved since we were in diapers. Furthermore, I love the idea of a Justice League Dark; each character comes from the mystical side of the DCU. We have Jason Blood and the Demon Etrigan, bound to each other since the medieval age. Then there's Zatanna, a stage magician who wields true supernatural power. We also have Deadman, a former trapeze acrobat who didn't cross over to the other side when he died. There's Swamp Thing, the bog creature with the heart of a man. Finally, and most importantly, we have John Constantine, paranormal investigator who has supernatural power himself. Constantine is an icon of DC's Vertigo label, going back some thirty years.

What's most impressive is that Constantine is voiced by Matt Ryan. Back in 2014, there was a short-lived Constantine television series that only lasted 13 episodes before being cancelled. John Constantine was played by Matt Ryan, and when the character was featured later on another show on another network, Arrow, Ryan reprised his role. Remarkably, Ryan is STILL with the character by voicing him for this animated movie. I love seeing the commitment by the actor to the role, and I also love that he is being allowed to continue as the character at every opportunity.

Plot isn't really Justice League Dark's strength; it's serviceable enough, with there being a big supernatural threat that must be stopped. When the regular Justice League (the one with Superman, Batman, Wonder Woman, and Green Lantern) doesn't know how to approach the problem, Batman more or less recruits these characters who are grounded in magic, fighting fire with fire. It could be any of a million different global threat stories and this wouldn't be much different. What makes Justice League Dark work is the characters themselves. It's just nice to have a break from the same old dynamics and bickering and have some new dynamics at play. All of these characters have been around in comics for a very long time, so there's a lot of history and personality to draw from in order to flesh them out and make them feel grounded in this world. It mostly works. 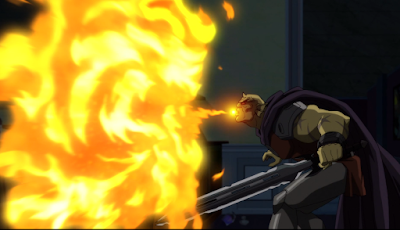 However, there are some missteps with this film. Aside from Matt Ryan as Constantine, the voice casting is questionable. I get that they have to stick with previously-established voice casting decisions, but I don't care much for Jason O'Mara as Batman, Jerry O'Connell as Superman, and I HATE Nicholas Turturro as Boston Brand, aka Deadman. It's literally the LAST interpretation I would have expected for this character. Maybe that's on me, but it's just not the voice I expect to hear coming from Deadman; in fact, Deadman's whole portrayal and line delivery seems like something from a completely different show, namely a slapstick cartoon from Hannah Barbera.

Also, this movie is rated R. While there is some violence (mostly bloodless) and some seriously dark and thematic elements at work, there is absolutely nothing in this movie that you don't see every single summer at the movie theater for a PG-13 film. There is no nudity and very little profanity (no f-bombs), so I can't help but think that WB pushed for an R-rating so that this would feel like a bigger deal than it is. Don't get me wrong; I've complained for years about how retail stores (I'm looking at you, store that rhymes with Farget) stock these DC animated films in the family section next to Teenage Mutant Ninja Turtles. A kid sees Batman on the cover, talks him mom into buying it, and next thing you know he's crying on the floor in a fetal position. I'm exaggerating, but it's always bugged me that no one seems to be paying attention to the fact that these are not for children. That being said, this does not deserve to be rated R, and I wonder if they're depriving a teenage audience from seeing this movie. Then again, they'll find it if they want to see it.

Did I mention there's a poop monster? Because there is.

All in all, this is a solid outing from WB's animation department. It looks good, the standards seem to be pretty high, and it's populated by characters that I enjoyed watching. Jay Oliva directed the project, and he's been the driving force between some of my favorite films in the DC animated Universe (Batman: Bad Blood, Assault on Arkham, and especially the animated adaptation of The Dark Knight Returns). Here's hoping that we get more stuff like this, far outside the box, in the future. These DC animated movies work best when they aren't afraid to dig deep into the corners of the universe.

Justice League Dark isn't the best in the line, but it's still recommended. 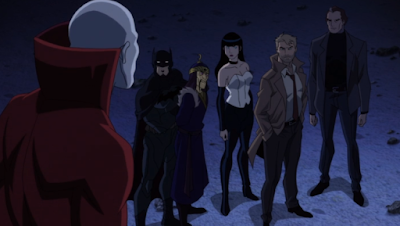