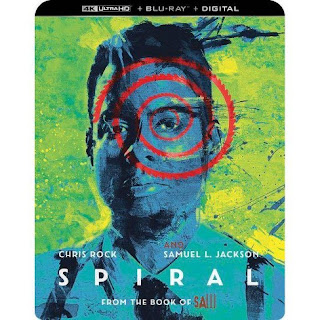 For those keeping score, Spiral: From the Book of Saw  is the ninth movie in the splatter horror franchise that built a name on elaborate death traps and perverse morality. For this latest entry, Chris Rock takes the lead as a police detective investigating an ever-growing pile of bodies left behind from a copycat of Jigsaw, the twisted mastermind of the series. Rock's character is the son of a famous cop, played by Samuel L. Jackson, and in addition to solving the murders, he's got a lot of baggage from a complicated father/son relationship.  The reader may be wondering "what does this movie bring to the table that's fresh and unique?" The answer? Not much. Because we finally seem to have moved on from Jigsaw, we've got a new mystery to unravel and new victims, even new faces leading the charge against these horrific crimes, but really, Spiral  offers more of the same that we've come to expect from this series. That's either a good thing or a bad thin
Post a Comment
Read more

Christmas in July: THE NIGHT BEFORE feat. Lisa Downs