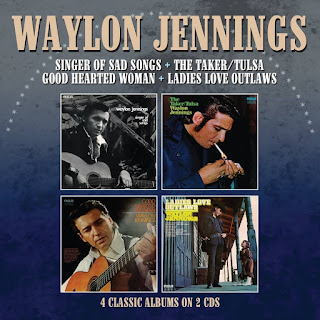 On July 16, 2021, Cherry Red Records will release four rare albums from the country outlaw icon Waylon Jennings. These albums chronicle the singer's transition from a clean-cut member of the country music establishment to the long-haired rebel who fought against Nashville and, more specifically, the stifling control that RCA Victor was imposing upon him as an artist.   Singer of Sad Songs  from 1970 was recorded almost entirely in Hollywood by Lee Hazlewood, who had made a name for himself as a frequent collaborator of Nancy Sinatra. With an emphasis on reverb and guitars as opposed to the traditional syrupy Nashville sound at the time, the album finds Waylon covering The Rolling Stones, George Jones, and Hazlewood himself.  1971's The Taker/Tulsa  moves things one step further, with nearly half the compositions on the album coming from Kris Kristofferson and with recording sessions that utilized Ricky Nelson's band in Los Angeles. The record label refused to promote the
Post a Comment
Read more
More posts