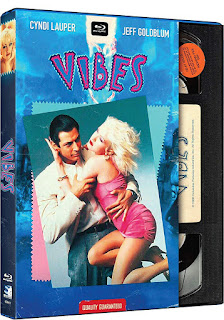 Before Mill Creek Entertainment announced 1988's Vibes  as part of their latest wave of retro VHS-style slipcover Blu-rays , I hadn't even heard of the movie, at least not that I can remember. Yet, something about it immediately ignited my interest. In part, it was the cast: Jeff Goldblum, Cyndi Lauper, and Lieutenant Columbo himself, Peter Falk. Maybe it was that cover image, recreating the stunning video cassette box art. Maybe it was even the font of the title logo, which screams 1988 and ignites my nostalgia for the long-gone days of my childhood. Regardless, I couldn't wait to pop Vibes  into my Blu-ray player. I was not disappointed. The movie is delightfully quirky, seemingly in service of no particular direction or tone. At some points, it's a comedy about characters who are gifted with psychic abilities, while at others, it's a romance. Still at other times, it's an adventure movie that seems to be chasing Raiders of the Lost Ark  and Romancing t
Post a Comment
Read more

Robby the Robot, the mechanical masterpiece made famous in the 1956 science fiction film Forbidden Planet, has arrived on Walmart toy shelves! In this video, we unbox the toy robot, which speaks, walks, and lights up! Check your local Walmart for Robby HERE
Post a Comment
Read more
More posts