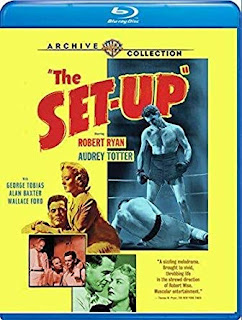 Some thirteen years after making a DVD debut as part of Warner's "Film Noir Collection Vol. 1," The Set-Up makes a triumphant appearance on Blu-ray thanks to Warner Archive. The film is a seminal work of crime/noir, and its influence can be seen in dozens of movies and television specials that came after it. Each of these ripples in the pop culture waters testifies to the power of the 1949 crime film masterpiece. One of the most powerful homages comes from none other than Quentin Tarantino himself, who pays his respects to the film with the entire segment of Pulp Fiction  that deals with Bruce Willis' defiant boxer, Butch. Granted, Tarantino's tale seems to offer a tangential "what if" riff on the famous film, but the influence--and thus respect--is impossible to deny.
Post a Comment
Read more
More posts