Showing posts from December 5, 2019
Show all 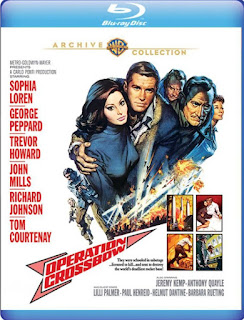 I wasn't sure what to expect going into the new Blu-ray of Operation Crossbow , a 1965 British World War II film with a stellar cast, now on Blu-ray from Warner Archive. Having never seen the movie before, I was prepared for an adventure movie set against the backdrop of global conflict, and the cover art, which replicates much of the film's original poster art, seems to promise thrills a minute. The blurb on the poster seems to double down on this promise: "They were schooled in sabotage...licensed to kill...and sent to destroy the world's deadliest rocket base!" As it turns out, that's an apt description, but it doesn't begin to do this film justice. Operation Crossbow  is stunning, powerful, tragic, inspiring, and yes, also exciting. It's the kind of experience that the big screen seems to have been made for.
Post a Comment
Read more
More posts