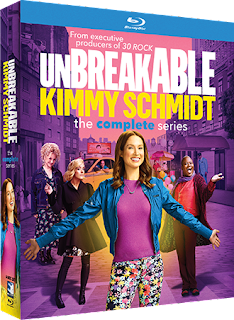 Mill Creek Entertainment has announced that they will be bringing all four seasons of  Unbreakable Kimmy Schmidt  to DVD and Blu-ray on February 4, 2020 in a "Complete Series" box set! The show was created by Tina Fey and Robert Carlock ( 30 Rock ) and stars Ellie Kemper ( The Office ) in the title role as the former member of a doomsday cult who finds a new life in New York City, which she embraces with wide-eyed enthusiasm. Tituss Burgess ( Dolemite is by Name ), Jane Krakowski ( 30 Rock ), and Carol Kane ( Taxi, Gotham ) co-star, while guest stars include Amy Sedaris, Jon Hamm, Josh Charles, Fred Armisen, David Cross, and Tina Fey. Unbreakable Kimmy Schmidt  is critically-acclaimed and was nominated for 18 Primetime Emmy Awards, including a nomination for Outstanding Comedy Series for each of its four seasons. Mill Creek Entertainment's announcement comes just weeks after the news that they will be bringing The Mindy Project starring Mindy Kaling (also from th
Post a Comment
Read more

Charlie's Angels remains one of the most iconic and recognizable shows in pop culture history. Now all five seasons have arrived on Blu-ray from Mill Creek Entertainment! Charlie's Angels in High Definition is a thing of beauty, and the transition to HD has made the show more vibrant than ever before, as evidenced in our screenshots comparing the new Blu-ray discs to the original DVDs! Please join us as we celebrate all the fashion, hair, bikinis, and and guest stars of the landmark TV show! Please be sure to check out the companion piece to this video, I Still Believe in Angels, written by Eric Grigs. It's a viewer guide, a top ten, and an appreciation, all in one! Find it HERE!
Post a Comment
Read more
More posts