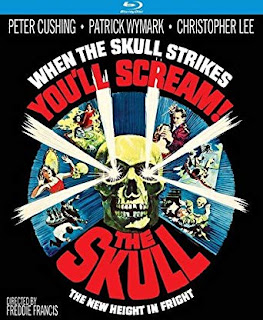 A stable of fine English actors, solid source material, and a truly-unnerving feeling of dread make 1965's  The Skull  a standout horror film that levitates above its limitations. There's a lot to appreciate with 1965's The Skull , from the cast, to the story, to the production itself. The film comes from Amicus, a studio that--for a time--stood toe-to-toe with Hammer Films as the pinnacle of British horror. This success was an ironic achievement, considering that Amicus was founded by two Americans working in the English film system. And while this movie doesn't quite have the Gothic grandeur that graces so many Hammer productions, it does excel through a story first penned by legendary genre-writer Robert Bloch (the author of Psycho ), outstanding cinematography, and a capital cast culled from Hammer's finest players.
Post a Comment
Read more
More posts