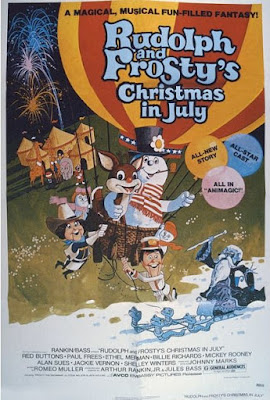 We're big fans of Rankin/Bass here at Cereal At Midnight, and we love talking about the company and their legacy every time we get a chance. No single company is more synonymous with holiday magic than Rankin/Bass, who is responsible for a string of TV specials that still get a lot of love decades after they originally aired. The collaboration between Arthur Rankin, Jr. and Jules Bass yielded Rudolph the Red-Nosed Reindeer (1964), Frosty the Snowman (1969), Santa Claus is Comin' to Town (1970), Here Comes Peter Cottontail (1971), The Year Without a Santa Claus (1974), Rudolph's Shiny New Year (1976), and our personal favorite, the theatrical film Mad Monster Party (1967) ! But nothing can prepare a viewer for the bizarre zaniness of 1979's  Rudolph and Frosty's Christmas in July, which feels like a fever dream starring Rankin/Bass' most successful characters.
Post a Comment
Read more
More posts