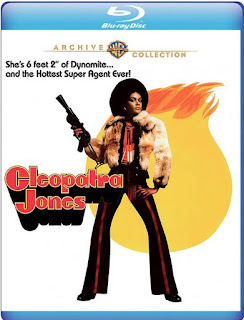 When it comes to Blaxploitation cinema, it's my opinion that there are two distinct types of films within the genre. In one camp are the films born out of the exploitation scene of the late sixties and early seventies, produced independently and often gritty, authentic, and occasionally even shocking. In the other camp are the films that came slightly later, when the major film studios recognized the trend and started to pursue the genre themselves. These big studio Blaxploitation films often feature slick cinematography, established talent from within the studio system on both sides of the camera, and sometimes feature a more sanitized, broader approach to the genre. 1973's Cleopatra Jones  falls into the latter category. Produced by Warner Brothers, this PG-rated outing stars Tamara Dobson (just one year removed from her major motion picture debut in the ensemble cop film Fuzz ) as the title character, a sassy, street-wise fox (complete with afro) who just so happens to
Post a Comment
Read more

We venture back to Ollie's Bargain Outlet for another haul of DIRT CHEAP trade paperback comics from Marvel and DC!
Post a Comment
Read more
More posts