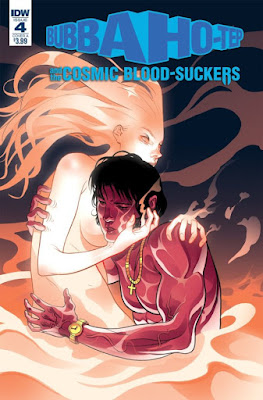 At last, the penultimate chapter of Bubba Ho-Tep and the Cosmic Blood-Suckers  has arrived from IDW Publishing! For those just joining us, creator Joe R. Lansdale's fun and irreverent premise blends Elvis, the seventies, and a whole bevy of supernatural forces that would annihilate us all if not for the good work being done by The King and a small band of defenders. The character was introduced in a novella by Lansdale that saw an elderly Elvis (years after faking his death) facing off against evil in the most unlikely of places, and that story was adapted into a feature film in 2002 that was directed by Don Coscarelli and starred Bruce Campbell and Ossie Davis. IDW's 2018 comic dials the clock back some years to the days when Mr. Presley was still taking care of business in a flash. He's a little over the hill, maybe, but he's still got a lot of diesel in the tank.
Post a Comment
Read more
More posts