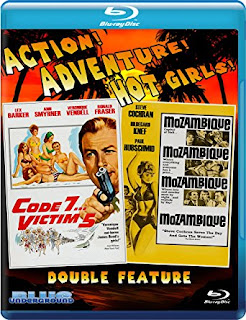 The good people at Blue Underground have rescued and restored a couple of early sixties genre movies in Code 7...Victim 5  and Mozambique , both produced by British indie filmmaker Harry Alan Towers as part of their "Double Feature" line of B movies. As far as I'm aware, both of these movies mark my first real exposure to Towers and his specific brand of schlock. Both films seem to be chasing the exotic location excitement of the James Bond movies, which were still fresh and new back in 1964, and both movies succeed at providing those elements by filming in South Africa. Unfortunately, there's not enough meat on the bones to really make for a totally satisfying movie experience, either.
1 comment
Read more
More posts