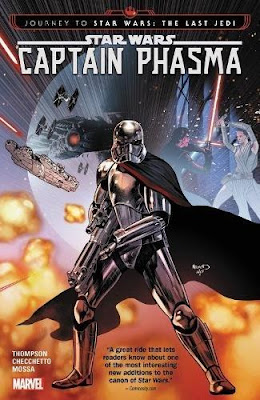 The world of Star Wars  is absolutely littered with characters that are fascinating and have detailed back-stories, yet get very little screen time. It's the double-edged sword of the iconic film series: they give us an awesome world that feels lived-in and is populated by characters that feel like they've always existed, yet they don't have the time or the means to delve too deeply into the mythology of every nook and cranny. Such is the case with Captain Phasma, a character that follows in the tradition of Jango Fett, Aurra Sing, Zam Wesell, Count Dooku, Plo Koon, Kit Fisto, and all the bounty hunters we met in The Empire Strikes Back , particularly Boba Fett. The movies just don't have the ability to give each one of these interesting characters the attention they deserve. Luckily, that's exactly the kind of thing that the Expanded Universe was created to do.
Post a Comment
Read more
More posts