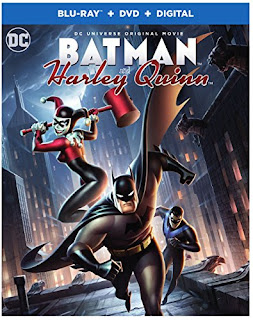 I hate having to write this.  Batman and Harley Quinn  should have been great. This movie reunites some of the people behind the now-legendary 1990s TV show Batman: The Animated Series  and clearly was intended to point directly to the iconic and groundbreaking cartoon adventures of the Caped Crusader.   To my memory, we haven't had a Warner Brothers animated Batman-specific movie directly connected to the '90s series in years.   Kevin Conroy returns here as the voice of Batman, but we're also treated to the return of Loren Lester as the voice of Dick Grayson, aka Robin/Nightwing. With many direct connections to the animated series, a spotlight on Harley Quinn, a character who is more popular than ever, and a story by Bruce Timm, the father of Batman: TAS,  what could possibly go wrong?
Post a Comment
Read more
More posts