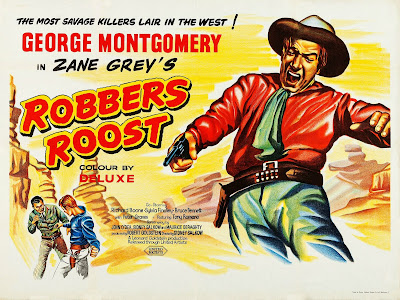 One of the things that continues to amaze me about westerns from the 1950s is that, despite the fact that hundreds (if not more) of them were made during the decade, each one feels unique and special with a different focus, tone, and style. Even westerns that star the same actors and film in the same locations manage to retain an individuality that never fails to impress me. Robbers' Roost  is another solid entry that helps to make the case that the fifties were the pinnacle of westerns on film. Furthermore, this movie comes from 1955, a year that I maintain is a very special one for movie fans. In fact, I wrote a ten-part series about the movies of 1955 over at F This Movie, highlighting how the films from that year represent a change in complexity and a deeper focus on more realistic characters. Consider George Montgomery in  Robbers' Roost . The actor plays our lead here, and we're introduced to him at the beginning of the movie when he walks in on a gang in a sal
Post a Comment
Read more
More posts