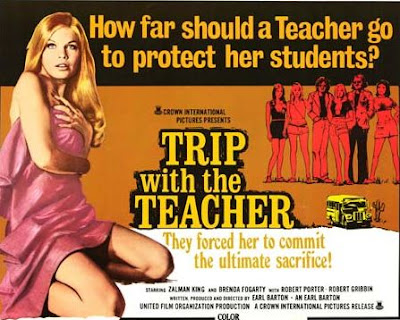 As far as your midnight movie plots go, there's nothing inherently unique about Trip with the Teacher . On the surface, this is your standard "mad motorcycle maniacs terrorize the innocent" plot, but it's done with so much style and at least one particularly stunning performance that it easily stands out against similar films. Brenda Fogarty ( The Beach Bunnies ) is a prim and proper teacher who is leading a handful of her female students (including Cathy Worthington in her debut) on an expedition into the desert to observe some Native American artifacts. Jack Driscoll ( Garden of the Dead ) is their bus driver, a stout man who is the spitting image of Sterling Hayden ( The Godfather ), circa 1957. Elsewhere in the desert, two motorcyclists, played by Zalman King ( Galaxy of Terror ) and Robert Porter ( Mackenna's Gold ), are broken down on the side of the road. Another motorcyclist happens upon them, played by Robert Gribbin ( Hitch Hike to Hell ), and when
Post a Comment
Read more
More posts