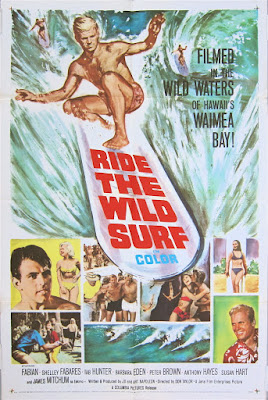 The sixties were filled with a glut of surf and beach movies, a trend that started during the late 1950's and eventually fizzled by the end of 1967. The formula was simple: throw some buff young guys and perky young girls in swimwear and film them to some exotic location that would hold appeal for a hungry and rebellious teenage audience, thus ensuring box office profits. The key was always to be a little provocative, but never so much that there was actually any controversy. There would be no nudity, very little innuendo, and absolutely no sex. It seemed to work, as there are a few dozen movies from this era that exist, and almost all of them share a sense of goofy fun and a Vaudevillian sense of slapstick. Frankie Avalon and Annette Funicello became wholesome icons, attractive but safe. 1964's  Ride the Wild Surf somehow manages to stand apart from the Frankie/Annette cookie-cutter pattern. It's still a breezy, fun movie, but the stakes feel much higher and the charac
Post a Comment
Read more
More posts